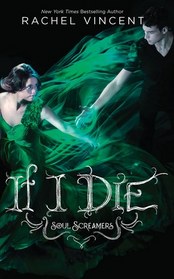 Everyone else is talking about Eastlake High’s gorgeous new math teacher, Mr. Beck, but Kaylee Cavanaugh has bigger things on her mind. Kaylee’s a banshee—her scream is a portent of death.

But the next scream might hit too close to home. Kaylee’s borrowed lifeline has almost run out.

Yeah—it’s a shock to her, too. So to distract herself from her own problems, Kaylee is determined to defend her school against the latest supernatural threat. That hot new teacher is really an incubus, who feeds from the desire of unsuspecting students. The only girls immune to his lure are Kaylee and Sabine, her boyfriend’s delinquent ex-girlfriend. Now the unlikely allies have to get rid of Mr. Beck…before he discovers they aren’t quite human either.

But Kaylee’s running out of time, and those who love her will do anything to save her life.

Soul Screamers: The last thing you hear before you die

Rachel Vincent’s urban fantasy novels have been causing a buzz in the US, with her fresh, hip and compelling style. Rachel also runs an active blog at urbanfantasy.blogspot.com.

So, Kaylee is trying to fix another supernatural entity from invading her world and this one attacks right at school.  Mr Beck is the math teacher and is also an incubus.  He doesn’t outright kills people, but some of his actions are starting to have that effect.  Kaylee enlists Sabine to help her get to the bottom of this evil, like being a math teacher isn’t evil enough.  Tod gets some information on Kaylee that will have you spinning and well, Nash, isn’t quite himself again.  This one is my absolute favorite of the series.  All of the snarky sarcasm, plot twists and turns and wonderful characters are here and so believable that I can die happy now.  Everything happened just as I wanted it too, well, almost.

Kaylee further develops the back bone that started to grow in My Soul to Steal.  It is nice to see her take charge and grow.  There is a bit more to Tod than meets the eye and more of his back story starts to come out including one revelation that really explains a lot about Nash and their relationship.  I had always thought Nash was not quite right for Kaylee and there was something about him that really bugged me, now I know why.   I really hope that the story continues since I can see a whole new direction for Kaylee.  When I first heard the rumors about Kaylee and the way this one ended, I though, well, that’s the end of the series, but now I think it is just the start.