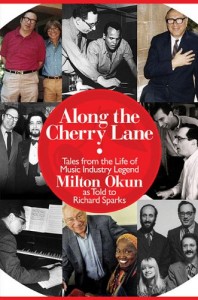 John Denver said, “I have a producer who looks like an accountant, and an accountant who looks like a producer.” Soberly dressed, unflashy, and a trained classical musician, in the golden age of the music business Milt Okun stood out by not standing out. His legacy does that for him. He discovered and launched John Denver, and mentored him throughout his career. He created arrangements for Peter, Paul and Mary that the trio performed for half a century. He brought Placido Domingo a crossover career that made him an international star beyond the world of opera. He founded Cherry Lane Music, publisher of Dreamworks and Paramount and Marvel, Elvis and Quincy Jones and the Black Eyed Peas.

2008 recipient of the Abe Olman Publisher of the Year Award from the Songwriters Hall of Fame as founder and publishing pioneer of Cherry Lane Music Publishing in 1960, Milt Okun’s career in the music industry includes roles as a singer, teacher, conductor, arranger, publishing executive, and author. As a producer, Okun is known for having worked with legendary artists such as John Denver; Placido Domingo; Peter, Paul and Mary; and Laura Nyro. After establishing Cherry Lane, Okun launched a music education magazine, Music Alive!, to bring the excitement of the music world into the music classroom, and to give back to music teachers and students.Richard Sparks explored the 21st-century poker boom in Diary of a Mad Poker Player and Getting Lucky. Before moving to Los Angeles he was a prolific scriptwriter for UK television, specialising in comedy (Not the Nine O’Clock News, The Optimist, The Worst of Hollywood) and children’s adventure series (The Famous Five, The Flying Kiwi). He now concentrates on writing opera libretti, both original works and translations of classics.

Milt Okun doesn’t look like he should be in the music business, he wears suits and he isn’t flashy.  He has a solid base in classical music.  So why did he end up producing many classic songs during the important formative years of rock and roll that is based on folk music?  Pure and simple:  he has an ear for what sounds right together and the talent to get the best out of performers.  And some of these performers needed a lot of help to get that performance on tape.  The stories he tells about some of the greatest hits of the era are just so fascinating and illuminating that you will be surprised to find out just what was behind these hits.  The Peter, Paul and Mary tales are worth the price of the book.  You will just have to break down and buy the book to get the juicy details on how that group worked.

To be honest, I had never heard of Milt Okun, which shocked me since I knew most of his work with musicians like John Denver and Placido Domingo.  That just shows how behind the scenes he is and not at all out for the fame.  The interview format of the book really works for bringing out his stories since I got the feeling that he isn’t a boastful person.  I am glad for once the nice guy won and it seems a lot of it was accidental.  He won over the hearts of many musicians just by his honesty.  The music industry isn’t exactly known for being forthright and fair, but that is exactly how Okun built his publishing business. This would make a perfect gift for that hard to please guy on your list.