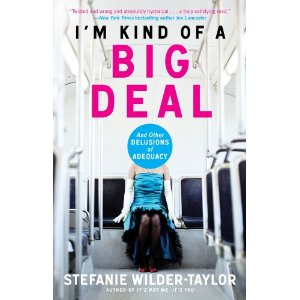 WARNING TO READERS: The Author of This Book is Kind of Crazy, Kind of Delusional, and All Kinds of Hilarious
Whether she’s driving a limo for former Family Ties star Justine Bateman, dancing in the dark for a rarely seen Bob Dylan music video, or stalking a bachelor reject from TV’s Love Connection, Stefanie Wilder-Taylor is kind of a big deal—at least in her own mind. Smart, screwy, and scathingly funny, her tell-all essays capture every cringe-worthy moment of her kind-of famous life. From bombing as a stand-up comic for born-again Christians, to winging it as a singing waitress in an Italian restaurant, to posting open letters to Angelina Jolie and David Hasselhoff, this unstoppable L.A. transplant refuses to give up on her dreams—no matter how ill-advised—and shows us a side of Hollywood better kept hidden. When it comes to funny women—unplugged and unleashed—they don’t get any wilder than Stefanie Wilder-Taylor. . . .

Stefanie Wilder-Taylor is the author of Sippy Cups Are Not for Chardonnay and Naptime Is the New Happy Hour. She has written and produced more than thirty television sketch, clip, and variety shows, and been featured on Today, Oprah, Dr. Phil, Larry King Live, The Dr. Oz Show, and the award-winning PBS show Real Savvy Moms. She lives in Los Angeles with her husband and three young daughters. Visit her website at stefaniewildertaylor.com.

Stephanie Wilder Taylor writes about her Hollywood days a bit in her latest memoir.  Each chapter is a new opens to something that would be perfect for a television skit on a comedy variety show.  This makes perfect sense since she used to write for television.  She recounts her first big break when she appears in a Bob Dylan video where she has visions of being the featured dancer like Courtney Cox was in a Bruce Springsteen video.  Her plan doesn’t even come close since she ends up hanging around dancing for 12 hours and when she leaves, she finds her car is gone!  She does meet Bob Dylan though and he is at least nice enough to explain that she parked in a tow zone.

Most of the book revolves around her drinking issues, the how and why, combined with anecdotes that are funny and a bit sad at the same time.   She really does have a way with words and you will find yourself pulled in by her writing style immediately.  Each episode brings you immediately into her world and it doesn’t matter that you have never heard of her before.  It is like a friend of a friend who has that bigger than life personality and you want to hear everything they have to say.  The parts I really enjoyed were her confessions about trying to be something she is not and realizing that it is ok to just be her.