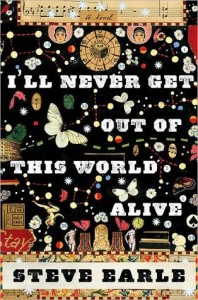 In 1963, ten years after Hank’s death, Doc himself is wracked by addiction. Having lost his license to practice medicine, his morphine habit isn’t as easy to support as it used to be. So he lives in a rented room in the red-light district on the south side of San Antonio, performing abortions and patching up the odd knife or gunshot wound. But when Graciela, a young Mexican immigrant, appears in the neighborhood in search of Doc’s services, miraculous things begin to happen. Graciela sustains a wound on her wrist that never heals, yet she heals others with the touch of her hand. Everyone she meets is transformed for the better, except, maybe, for Hank’s angry ghost—who isn’t at all pleased to see Doc doing well.

A brilliant excavation of an obscure piece of music history, Steve Earle’s I’ll Never Get Out of This World Alive is also a marvelous novel in its own right, a ballad of regret and redemption, and of the ways in which we remake ourselves and our world through the smallest of miracles.

STEVE EARLE is a singer-songwriter, actor, activisit, and the author of the story collection Doghouse Roses. He has released over a dozen critically acclaimed albums, including the Grammy winners The Revolution Starts Now, Washington Square Serenade, and Townes. He has appeared on film and television, with celebrated roles in The Wire and Treme.  Frequently interviewed and profiled in the press, he often tours with his wife, singer-songwriter Allison Moorer.

Doc Ebersole is a disgraced physician, who lost his license and is rumored to have given Hank Williams his fatal does of morphine.  He spends his days performing abortions, patching up knife and gunshot wounds while trying to earn enough to keep his own heroin habit afloat during the early 1960’s in a down and out area of racist San Antonio.   He takes care of a young Mexican girl, Graciela, who almost dies from blood loss and she stays with him long after her recovery.  Doc is haunted by the ghost of Hank, who goads him into his continuing drug use, but now finds that Graciela can see him and helps cure Doc from his addiction.  There are more miracles at the hand of Graciela where people are uplifted and their maladies cured quickly. The local priest gets wind of the miracles and begins to investigate which leads to the an interesting conclusion.

I am just amazed that this first novel from Steve Earle is so tightly paced and cleverly written.  It reminded me a great deal of the wackiness that appears in Christopher Moore’s books through the ghostly voice of Hank Williams.   There are also the magical properties like in  Sarah Addison Allen’s stories where under-the-radar miracles occur quietly in the form of Graciela.  The story mixes Catholicism with Mexican folklore during the early Sixties where social change is so prevalent and ties it all to the shooting of JFK.  This work helps you understand why Steve Earle is such a successful songwriter since this book is so lyrically alive and paints a wonderful picture with an economy  of words.  This is the perfect book for any one looking to expand their paranormal horizons with a bit of magic and ghosts.