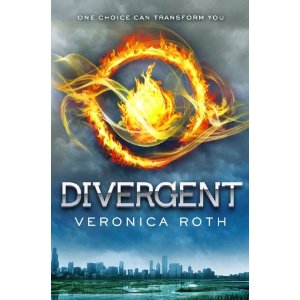 In Beatrice Prior’s dystopian Chicago, society is divided into five factions, each dedicated to the cultivation of a particular virtue—Candor (the honest), Abnegation (the selfless), Dauntless (the brave), Amity (the peaceful), and Erudite (the intelligent). On an appointed day of every year, all sixteen-year-olds must select the faction to which they will devote the rest of their lives. For Beatrice, the decision is between staying with her family and being who she really is—she can’t have both. So she makes a choice that surprises everyone, including herself.
During the highly competitive initiation that follows, Beatrice renames herself Tris and struggles to determine who her friends really are—and where, exactly, a romance with a sometimes fascinating, sometimes infuriating boy fits into the life she’s chosen. But Tris also has a secret, one she’s kept hidden from everyone because she’s been warned it can mean death. And as she discovers a growing conflict that threatens to unravel her seemingly perfect society, she also learns that her secret might help her save those she loves . . . or it might destroy her.
Debut author Veronica Roth bursts onto the literary scene with the first book in the Divergent series—dystopian thrillers filled with electrifying decisions, heartbreaking betrayals, stunning consequences, and unexpected romance.

Veronica Roth graduated from Northwestern University with a degree in creative writing. While she was a student, she often chose to work on the story that would become Divergent instead of doing her homework. It was indeed a transforming choice. Now a full-time writer, Ms. Roth lives near Chicago. Divergent is her first novel.

The story follows Beatrice Prior through a post apocalyptic Chicago where she has just turned sixteen and must decide whether to stay in her own faction (class)  of Abegnation  or move to a new one, severing all ties to her family in the process.  Of her five choices of Abegnation, Erudite,  Amity, Candor or Dauntless, she chooses Dauntless, the warrior class.  If she fails the initiation, she will be factionless and forces to live outside society as a castoff.  There is heart pounding action while Beatrice (now known as Tris), learns fighting, parcour and the use of weapons, all things that go against her peaceful family faction of Abegnation.  Of course, she doesn’t neatly fit into definition of Dauntless and the tests each teen is forced to take to an assessment test to determine where they belong.  Tris tests Divergent which means she doesn’t neatly fall into the government’s rankings.  The people accept things as they are until one in power becomes greedy and the factions are headed to war between themselves.

This is probably one of the best books I have read this year and I cannot wait until the next in this trilogy is released.  Even though it is almost 500 pages, it was a very quick read for me.  I got the same feeling while I was reading the Hunger Games series and it is in very much of the same vein.  I have heard that it also has been optioned for a movie which I think will be highly anticipated.   Well, at least for me.  I am leaving out the major spoilers, but this is just a wonderful read for teens over 14 since there is violence, a bit of kissing and some alcohol use.