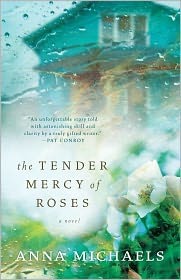 While the body of rodeo star Pony Jones lies motionless in the northern Alabama woods, her spirit is on a mission to find her killer. Invisible to the eye but not to the sixth sense, the only thing Pony can do is guide the living to the truth. Her grief-stricken father, Titus, wants nothing more than retribution for his daughter’s death, so when former police detective Jo Beth Dawson comes to town, something compels him to seek out her help.
But when Jo Beth and Titus team up to track down Pony’s murderer, it turns loose a whirlwind of intense emotion and unexpected encounters. As they uncover more and more clues leading them to the killer, dark family secrets are revealed and the two must search their souls for redemption.

Anna Michaels lives in an enchanted cottage in Mississippi where she grows the roses that served as inspiration for her debut novel, The Tender Mercy of Roses. Her gardens are also filled with cardinals, warblers and mocking birds that swing on a suspended dragon outside her office window and entertain her while she writes.Her love affair with words started when Anna was a child. She used to read books in a tree swing on her daddy’s farm and dream of being a writer. Also a pianist and sometimes-lyricist, Anna says she “hears the music of words.” She describes her writing process as “recording the melody and the magic of story.”
Anna loves sitting on her front porch swing with friends, singing in her church choir, watching classic movies, playing her vintage baby grand piano, and spending time with her family.
Currently, Anna and her unicorn muse are spinning another magical story. She will share details of her second novel as they unfold.

Pony Jones, a rodeo star, lays dead in the Alabama woods, but her spirit lingers in order to find her killer.  Her father Titus, bent on revenge,  teams up with a disgraced ex-police detective, Jo Beth, who feels a connection with the body and becomes determined to find the perpetrator.  The scent of Cherokee roses and Native American magic permeates the story as they try to find the murderer.  Jo Beth seems somewhat mysterious at first until her background is made clear and her friend Maggie cheers the group onward.  Jo Beth is at the crux of this story in more ways than one.  The families of Pony and Jo Beth are deeply intertwined.  There is also an under lying conflict between the the detective, Sam Donovan, who is Jo Beth’s former partner.

I really thought this book was a great mix of mystery, thriller and paranormal much like a bit of Sarah Addison Allen and  The Lovely Bones by Alice Sebold with a dash of The Late Lamented Molly Marx by Sally Koslow .  The writing really sparkles and you are quickly drawn into the magical world of Pony which is quite believable.  There are dark dramas played out by each character and you wonder if they will each be able to keep their lives together while unravelling this mystery and not destroy each other.  I just wish I didn’t know who the killer was right at the start and that would have been explained a bit later in the book.