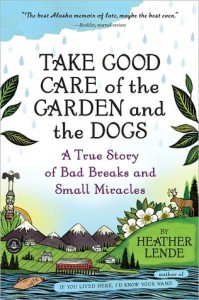 The Alaskan landscape — so vast, dramatic, and unbelievable — may make it easier to believe that something or someone greater is in charge. Haines resident Heather Lende wonders whether that’s why people in her town (population 2,400) so often discuss the meaning of life. She thinks it helps make life mean more.

Lende, who writes the local obituary column and has been called “part Annie Dillard, part Anne Lamott” by the Los Angeles Times, revealed in her first book a deep awareness of what links all humanity. Since then, she was run over by a truck in an almost fatal accident and has had a few more reasons to consider matters both spiritual and earthly. In Where God Resides we meet the community that helped her get back on her feet: the eccentric, fiercely independent, always fascinating residents of Haines—Buddhists, bear hunters, Tinglit Indians, and her large, lively family. We follow Lende as she attends her small Episcopal church, cares for her mother, wonders how to forgive the driver who hit her and how not to faint with joy as she finally walks down to the beach for her daughter’s wedding. By the time we reach a certain age, most of us have been hit by trucks, in one way or another, and Lende shows us that our responses to those setbacks have everything to do with faith.

Heather Lende has contributed to the Christian Science Monitor, NPR’s Morning Edition, the New York Times, the Washington Post, and Alaska Magazine. She is a columnist for the Anchorage Daily News and for the Alaska Dispatch, an award-winning web-paper on all things Alaska.

This book explores small town life in Alaska and how the author recovered from being hit by a truck.  She reminisces about the people she has helped, the people who have helped her and the loss of her mother.  It is  really an anthology of Heather Lende’s columns from various sources.  I had thought this book would be about gardens and dogs and found that the title comes from her mother’s last words before her death.  There are a few mentions of both dogs and gardens, but not as much as I hoped.  Most of the stories reflect back on life and the lives of people who have touched Lende’s heart in a very Christian way.  It is not so much religious as it is spiritual since Lende explores the meaning of life and death.

I found the stories about the community that is shared in the small town of Haines, Alaska to be fascinating.  Lende explores the meaning and connection between each resident and how they all pull together after her accident.  She even knows the person who hit her while she was bike riding and never blames him.  I did enjoy reading about her recovery but some of the other chapters were a bit too religious for me.