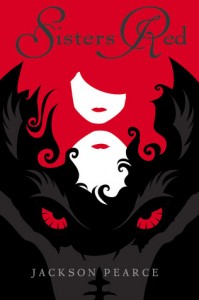 Scarlett March lives to hunt the Fenris–the werewolves that took her eye when she was defending her sister Rosie from a brutal attack. Armed with a razor-sharp hatchet and blood-red cloak, Scarlett is an expert at luring and slaying the wolves. She’s determined to protect other young girls from a grisly death, and her raging heart will not rest until every single wolf is dead.

Rosie March once felt her bond with her sister was unbreakable. Owing Scarlett her life, Rosie hunts ferociously alongside her. But even as more girls’ bodies pile up in the city and the Fenris seem to be gaining power, Rosie dreams of a life beyond the wolves. She finds herself drawn to Silas, a young woodsman who is deadly with an ax and Scarlett’s only friend–but does loving him mean betraying her sister and all that they’ve worked for?

Jackson Pearce is the author of Sisters Red and As You Wish. She lives in Atlanta, Georgia.

Scarlett can give Buffy a run for her money in the kicking butt department and she is teaching her younger sister, Rose, to hunt the Fenris (werewolves) after she is injured and loses an eye to one.  Their neighbor, Silas, is a woodsman and quite handy with an ax and he joins in their hunt for revenge on the werewolves.  The story is told by each girl in alternating chapters and shows how each of the girls develop their own personality even though they are one heart in two pieces.  Scarlett is all about the hunt while Rosie is a bit timid with all things.  Things between the two girls start to change when Silas, the neighborhood woodsman, comes into the picture when they move to Atlanta to try and kill more wolves than they can reach in the small rural town they live in.

Things change when Rosie starts to become more independent with Silas’ help and Scarlett realizes she is losing her to Silas.  There is a lot of action, some gruesome, in the story but overall, it is done with a light touch.   I love the strength that Scarlett portrays and how Rosie starts to develop her own personality over her somewhat overbearing sister.  Silas, in a twist I didn’t see coming, shows much maturity and courage that the story needs to move forward.  This should be a must read for mash up fairy tale fans and other than some violent images and a bit of kissing, there is not much for parents to worry about.

WANT TO WIN THIS arc BOOK?