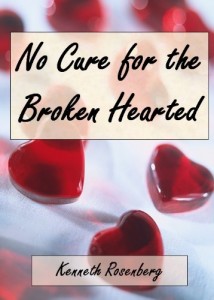 Katherine Spencer is an up-and-coming architect in New York City. Her professional life is on the fast-track. Her personal life is a shambles. Katherine compares every man she ever meets to Nick Bancroft, the billionaire’s son who broke her heart one summer long ago. Now, twelve years later he’s suddenly reappeared, asking her to design a house at the cove where they shared their first kiss. Is he looking for an architect, or something more? And should she forgive him?

Kenneth Rosenberg grew up in Southern California, where he studied English Literature at UCLA. His articles have appeared in such publications as the Los Angeles Times and Surfer Magazine. When he is not writing, Kenneth enjoys surfing, snowboarding, photography and traveling the world on a shoestring.

Katherine’s first love broke her heart at sixteen and although she tries to move on, she keep comparing every man she meets to Nick, the rich kid who stole her heart during a summer romance.  They vow to stay in touch, but his mother makes sure that never happens.  She becomes a celebrated architect and workaholic, despite the efforts of her BFF, Amanda to get her to meet guys,   Nick has bruised her heart and she carries a bit of resentment with her always, so when he approaches her to design a house in the beach cove where they shared their first kiss, Katherine hesitates and reluctantly agrees to take on the project after meeting his fiance, Fiona.  Nick has his share of bad boy behavior and you wonder if he will ever grow up.

This is a story of second chances and takes you to Southeast Asia and Africa while Katherine searches for Nick and while those details are nicely woven into the plot, I wondered why she would hesitate at all when she finally reunites with him.  I really thought this was a nice clean romance that was a quick enjoyable read.  The characters are believable and the author does a nice job wrapping the whole thing up.  It reminded me a bit of Nicholas Sparks. Who says guys can’t write romance?