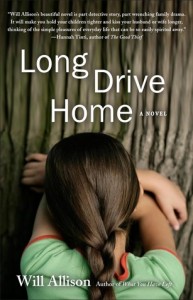 In his riveting new novel, Will Allison, critically acclaimed author of What You Have Left, crafts an emotional and psychological drama that explores the moral ambiguities of personal responsibility as it chronicles a father’s attempt to explain himself to his daughter—even though he knows that in doing so, he risks losing her. Life can change in an instant because of one small mistake. For Glen Bauer, all it takes is a quick jerk of the steering wheel, intended to scare a reckless driver. But the reckless driver is killed, and just like that, Glen’s placid suburban existence begins to unravel.
Written in part as a confessional letter from Glen to his daughter, Sara, Long Drive Home evokes the sharp-eyed observation of Tom Perrotta and the pathos of Dan Chaon in its trenchant portrait of contemporary American life.
When Glen realizes no one else saw the accident, he impulsively lies about what happened—to the police, to his wife, even to Sara, who was in the backseat at the time of the crash. But a tenacious detective thinks Sara might have seen more than she knows, or more than her parents will let her tell. And when Glen tries to prevent the detective from questioning Sara, he finds himself in a high-stakes cat-and-mouse game that could end in a lawsuit or prison. What he doesn’t see coming is the reaction of his wife, Liz—a panicked plan that threatens to tear their family apart in the name of saving it.
But what if the accident wasn’t really Glen’s fault? What if someone else were to blame for the turn his life has taken? It’s a question Glen can’t let go of. And as he struggles to understand the extent of his own guilt, he finds himself on yet another collision course, different in kind but with the potential to be equally devastating. Long Drive Home is a stunning cautionary tale of unintended consequences that confirms Will Allison’s growing reputation as a rising literary talent.

Will Allison’s debut novel, What You Have Left, was selected for Barnes & Noble Discover Great New Writers, Borders Original Voices, and Book Sense Picks, and was named one of 2007’s notable books by the San Francisco Chronicle. His short stories have appeared in magazines such as Zoetrope: All-Story, Glimmer Train, and One Story and have received special mention in the Pushcart Prize and Best American Short Stories anthologies. He is the former executive editor of Story

Glen writes his daughter, Sara, a letter explaining what went wrong in his marriage to Liz and the events that lead up to their divorce.  The letter is interspersed with the story of that time period.  In a way, Glen is asking his daughter for forgiveness and trying to make thing right when he lies and tries to make her believe that the accident she witnessed as a six year old didn’t happen the way it really did.  Glen and his wife try to cover up his involvement in the accident by lying to the police when questioned about exactly how the accident occurred.  I just really got a uneasy feeling from the actions of both these characters, especially his lawyer wife, Liz, who immediately wants a divorce to protect their assets.  In parts, this book really creeped me out.

The crux of the whole story centers around the accident where Glen tries to scare a wreckless driver by swerving a bit in front of him to stop his erratic speeding and instead the car rolls, killing the teen driver.  Sara sitting in the backseat remembers details but not everything, she knows just enough to really incriminate her father.  The main part that really bothered me about this accident is that, yes, Glen is partially at fault for the accident, but it would have not been as severe or even avoided, if the teen had been driving safely.  The police who question him really seem to be out to get him since they know he is lying.  Glen also is incredibly immature and this is shown in great detail when he stalks another driver who threatens him after a previous run in right before the accident.  The story really brings to light how little things can add up to create a monsterous problem.