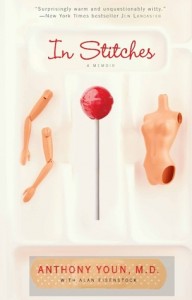 Tony Youn grew up up one of two Asian-American kids in a small town of near wall-to-wall whiteness.  Too tall and too thin, he wore thick Coke-bottle glasses, braces, Hannibal Lecter headgear, and had a protruding jaw that one day began to grow, expanding Pinocchio-like, protruding to an unthinkable, monstrous size.  After high school graduation, while other seniors partied at the shore or explored Europe, Youn lay strapped in an oral surgeon’s chair as he broke his jaw, then reset it and wired it shut for six weeks. Ironically, it was this brutal makeover that led him to his life’s calling — and the four years of angst, flubs, triumphs, non-stop studying and intermittant heavy drinking that eventually earned him an M.D. Thanks to a small circle of close friends and an obsessive drive to overachieve, Youn transformed from a shy, skinny, awkward nerd with no confidence and no clue into a renowned and successful plastic surgeon.
In Stitches is a heartfelt, candid, and laugh-out-loud memoir of one man’s bumpy road to becoming a doctor and learning to be confortable in his own skin.

From Dr. 90210  to CNN to the Rachael Ray Show, DR. ANTHONY YOUN is quickly becoming America’s best-known expert on cosmetic surgery. A Board Certified Plastic Surgeon, he has also appeared on The Doctors, The CBS Early Show, Fox and Friends, The O’Reilly Factor and elsewhere. His comments have been featured in such publications as US Weekly, In Touch, Life and Style, RADAR magazine, the National Enquirer, Star, and the Detroit Free Press. His blog, Celebrity Cosmetic Surgery, is one of the most popular medical blogs in the country.

ABSOLUTELY LOVED IT
I have read several books about students and their path to becoming a doctor, but the one Anthony Youn wrote about his path is by far the best of the bunch.  I read this is one night and didn’t want the stories to end!  I am now demanding a sequel about his stories, both heartwarming and humorous in his next journey of being a plastic surgeon.  I had no idea he was on so many television programs, but now that I know his name and looked at a few You Tube videos, I am going to start checking out this personable physician.  My favorite story in the book is about why he wanted to become a doctor and how his answer never strayed from the fact that he wanted to help people and get laid.  Yes, he actually said that and I laughed out loud.  He thought that being a doctor would make him more attractable to women!
Youn’s thoughts cover a broad range of thoughts, like what it is like to be a real minority, have parents that make you do more than you think you are capable of and the importance of having a sense of humor.  His sense of humor is evident throughout the book and he likes to poke fun at himself.  I was really impressed that his path to becoming a plastic surgeon was built upon his own triumph of having surgery to correct his jaw which did not stop growing and caused a massive underbite. The fact that he understands deformity leads him to connect with his patients on a personal level and makes him that much better a doctor.  There is truly a “Scrubs” type element when he writes about his internship and school years and it is amazing that anyone in this country ever becomes a doctor at all with all of the long hours they endure.