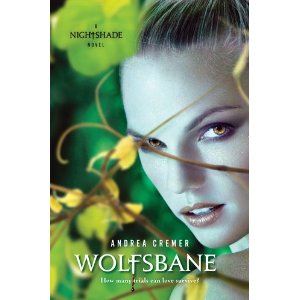 This thrilling sequel to the much-talked-about Nightshade begins just where it ended-Calla Tor wakes up in the lair of the Searchers, her sworn enemy, and she’s certain her days are numbered. But then the Searchers make her an offer-one that gives her the chance to destroy her former masters and save the pack-and the man-she left behind. Is Ren worth the price of her freedom? And will Shay stand by her side no matter what? Now in control of her own destiny, Calla must decide which battles are worth fighting and how many trials true love can endure and still survive.

Andrea Cremer lives in Minneapolis, Minnesota, where she’s a professor in the history department at Macalester College. Wolfsbane is her second novel.

After escaping from her betrothal to Ren, Calla wakes up in her enemy’s, the Searchers, stronghold. As Calla regains her strength and starts to question what happened, she is reunited with Shay. As Calla starts to trust the Searchers and slowly realizes the lies she has been told by the Guardians.  The first part of the book details the truths and falsehoods of each group, but I still had a bit of a feeling that all is not what it seems in either camp.  Calla is now faced with mixed feelings about Shay and Ren once she learns that Ren has helped her escape.  The last part of the book is fully action packed so much that your heart will race until you turn the last page.

This book leaves us with a major dilemma facing Calla about Ren and Shay as to which one really holds her heart.  Shay makes her feel giddy and in love, while Ren inspires the steady love that she has always known.  Ren does not make any real appearances in this book, but he is there in the background and a central force in Calla’s actions.  So yes, you are faced with a triangle which I hope will be worked out in book three.  I have extremely mixed feelings about Ren and Shay in which neither seem exactly right for Calla.  Calla, to me, is a typical girl, very confused and yet strong when she needs to be.  She needs some answers instead of just acting on instinct as she seems to be doing in this book.  I really hope all of my questions are answered in the next installment.

Yes, I know the cover I used has been changed, but I like this one better.