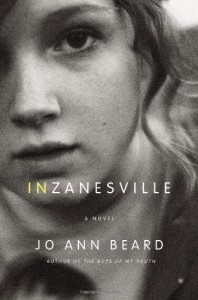 The beguiling fourteen-year-old narrator of IN ZANESVILLE is a late bloomer. She is used to flying under the radar-a sidekick, a third wheel, a marching band dropout, a disastrous babysitter, the kind of girl whose Eureka moment is the discovery that “fudge” can’t be said with an English accent.

Luckily, she has a best friend, a similarly undiscovered girl with whom she shares the everyday adventures of a 1970s American girlhood, incidents through which a world is revealed, and character is forged.

In time, their friendship is tested– by their families’ claims on them, by a clique of popular girls who stumble upon them as if they were found objects, and by the first, startling, subversive intimations of womanhood.

With dry wit and piercing observation, Jo Ann Beard shows us that in the seemingly quiet streets of America’s innumerable Zanesvilles is a world of wonders, and that within the souls of the awkward and the overlooked often burns something radiant and unforgettable.

Jo Ann Beard is the author of a collection of autobiographical essays, The Boys of My Youth. Her work has appeared in The New Yorker, Tin House, Best American Essays, and other magazines and anthologies. She received a Whiting Foundation Award and nonfiction fellowships from the John Simon Guggenheim Foundation and the New York Foundation for the Arts.

This book is such a love letter to the 70’s which is a time I know well.  I still can’t figure out the name of the narrator, but I guess it might be “Jo” and maybe this book is a bit of memoir of the author.  Jo is at that awkward period in every girls life which seems to happen around fourteen.  Flea (Felicia), her best friend shares the horribleness of this age with Jo (the narrator).  This should be a hit with adults as well as teens since it describes the angst and anguish that accompany this age.  The girls are so unsure of themselves and it really hits that theme beautifully.  There is also a great deal of humor that accompanies this coming of age story.

Jo’s father is a salesman and drinks which puts her family in a destitute situation as well as emotional turmoil.  The girls are separate by cliques at school and also their families which almost brings about the end of their friendship.  I loved how Jo and Flea go from Band Nerds to Popular and back again.  This book will really hit you emotionally and I think most females will identify with the story.  This is best suited for older teens and adults.