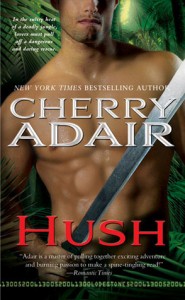 National bestselling author Cherry Adair introduces an edgy, sexy new suspense series with this exhilarating international tale of hide and seek. A reckless adventure in a deadly paradise.
Thrill seekers Zakary and Gideon Stark travel the globe in search of extreme adventure, but a trip to Venezuela to jump off the world’s highest falls catapults them into a perilous game of life or death—where they don’t know the rules.
A one-night stand that will change his life forever.
Kidnapped with a woman Zak knows nothing about, the brothers are held prisoner deep in the jungle. A risky, deathdefying escape separates them and nearly claims Zak’s life . . . until his recovery reveals a baffling new sixth sense.
An unexpected diversion with lethal consequences.
Now, to find his missing brother, Zak and the mysterious Acadia Gray will have to out-smart, out-gun, and out-maneuver not just the brutal kidnappers but also a new player who joins the adrenaline game: a ruthless opponent who wants the Stark brothers dead—at any cost.

Cherry Adair has garnered numerous awards for her innovative action-adventure novels, which include White Heat, Hot Ice, On Thin Ice, Out of Sight, In Too Deep, Hide and Seek, and Kiss and Tell, as well as her thrilling Edge trilogy: Edge of Danger, Edge of Fear, and Edge of Darkness. A favorite of reviewers and fans alike, she lives in the Pacific Northwest.

LOVED IT
Wow!  Talk about a thrill ride, this is even more exciting than a roller coaster!  The story starts out with Zak in a compromising position and a gun pointed to his head after a one night stand and the action doesn’t stop until the end.  Arcadia, at first seems like a whiny bimbo, but don’t let her looks and initial attitude get in the way of her true intelligence and beauty.  Any girl who knows how to pack a vest (hah! pun intended) like Arcadia really has it going on.  The story takes us through an exciting rain forest and all of the creatures , both human and animal that you can imagine.  Zak is a man in need of a good woman since he has been hurt and has withdrawn to the point where he has a death wish. Arcadia and Zak really burn up the pages together and I adored Arcadia’s smart mouth.  There is witty dialogue and enough action that you might want to read this one again in case you miss anything the first time through.  I hope this adventure is continued!