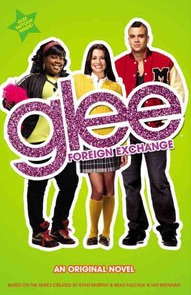 Can Rachel Berry rock a beret? McKinley High goes international and invites a French glee club to town – ooh la la! In this hilarious culture-clash story, Kurt gets an entourage, Finn falls for a new girl, and Puck realizes that some suave moves are lost in translation.

In this second original novel, you’ll get more mash-ups, more show-mance, and more Sue in a brand-new story officially approved by the creators of Glee.

Glee Original Novels – they’re almost as exhilarating as a slushie in the face!

Very rarely does a television show translate well into written word, but Glee:  Foreign Exchange is pitch perfect.  I really felt like each voice of the cast was captured perfectly and the story flowed just as well as a television script. That said, there is no music that makes this book sing like the television show.  It would have been wonderful if there would have been snippets of the song available online to go with the book.  As far as this being just a young adult novel, it is better than most with an easy to follow and enjoy storyline.

McKinley High is hosting a group of foreign chorus singers from France and each member of the group has unique experience with this exchange.  Kurt meets people that are more fashionable than he is, Finn finds a new love, Puck’s sexiness doesn’t translate and Rachel meets her match.  Sue has some great barbs about Mr. Shu’s hair — those quips are just spectacular! Brittany delivers several spacey one liners that amaze me.  This is the perfect read for anyone who adores Glee as much as I do.