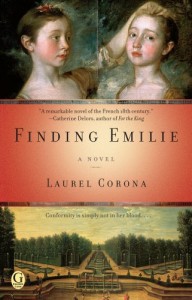 Woman is born free, and everywhere she is in corsets. . . . Lili du Châtelet yearns to know more about her mother, the brilliant French mathematician Emilie. But the shrouded details of Emilie’s unconventional life—and her sudden death—are elusive. Caught between the confines of a convent upbringing and the intrigues of the Versailles court, Lili blossoms under the care of a Parisian salonnière as she absorbs the excitement of the Enlightenment, even as the scandalous shadow of her mother’s past haunts her and puts her on her own path of self-discovery.
Laurel Corona’s breathtaking new novel, set on the eve of the French Revolution, vividly illuminates the tensions of the times, and the dangerous dance between the need to conform and the desire to chart one’s own destiny and journey of the heart.

Laurel Corona is a professor of humanities at San Diego City College and a longtime resident of Southern California. She is the author of The Four Seasons: A Novel of Vivaldi’s Venice, along with numerous works of nonfiction.

This is a wonderful historical fiction novel that details the age of Enlightenment, an intellectual revolution that occurred in France during the late 1700’s and the Revolution..  The story revolves around Lili, who is taken in by the de Bercy family after his mother dies while she is an infant.  Lili’s mother, ahead of her time, was a mathematician and lived an unconventional life. Lili tries to discover her mother’s secrets and shows her intelligence at a time when woman are to be seen and not heard.  Corona does an excellent job portraying society in pre-revolutionary France while describing the consequences of going against the community.

This story also will have you enjoying math and physics and the author works them in seamlessly.  I was really intrigued with some of the ideas put forth in the novel and probably spent way too much time looking them up.  I found it interesting that Lili’s tale really comes alive through the Meadowlark stories that appear throughout the book.  The end of the book contains the completed works.  If you enjoy Philippa Gregory and Jean Plaidy, you will love this one!