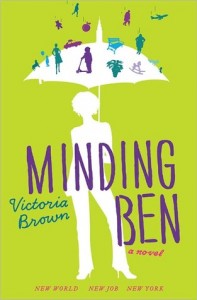 At sixteen, Grace Caton boards her first airplane, leaving behind the tropical papaya and guava trees of her small village in Trinidad for another island, this one with tall buildings, graceful parks, and all the books she can read. At least that’s what Grace imagines. But from the moment she touches down, nothing goes as planned. The aunt who had promised to watch over her disappears, and Grace finds herself on her own. Grace stumbles into the colorful world of Crown Heights, Brooklyn, having been taken in hand, sort of, by a fellow islander, Sylvia. Here, she’s surrounded by other immigrants also finding their way in America. From her Orthodox Jewish landlord, Jacob, to her wannabe Jamaican friend, Kathy, who feels that every outfit can be improved with a Bedazzler and a low-cut top, there’s much to learn about her new city.
Most challenging of all is figuring out her new employers, the Bruckners, an upper-middle-class family in Manhattan. The job is strange–Grace’s duties range from taking daily nude photos of her pregnant boss (a shock to her, since she’s never even seen her own mother naked) to dressing in a traditional maid’s costume to serve Passover seder. But Grace loves four-year-old Ben, and she’s intrigued by the alternately friendly and scheming nannies who spend their days in Union Square Park, and by their constant gossip about who’s hired, who’s fired, and who, scandalously, married her boss.
As the seasons change, Grace discovers that the Bruckners have surprising secrets of their own, and her life becomes increasingly complicated and confusing. But opportunities appear in the most unexpected places, and Grace realizes that she’s living in a city–and a world–where anything is possible.

VICTORIA BROWN was born in Trinidad and at sixteen came alone to New York, where she worked as a full-time nanny for several years. She majored in English at Vassar College before attending the University of Warwick in Coventry, England. Eventually, she returned to New York, where she taught English at LaGuardia Community College. She is now completing her MFA at Hunter College. Victoria lives in Brooklyn with her husband and two young children. She has a part-time babysitter in her employ.

Grace comes to New York as a sixteen year old in search for a better life and ends up as a child care provider to a four year old, Ben.  She learns to grow up fast and deal with some strange and new customs like the daily nude photography of her pregnant employer.  While most kids this age would decline, Grace realizes that she has limited choices and adapts.  She must also deal with playground politics that would stun the most hardened  business person.  The story follows Grace through her adventures in New York and her falling in love with her four year old charge, Ben.

I liked the story, but parts of it were slow for me.  I found it interesting that there is a huge underground network of nannies from the islands south of the United States.  The parents are caricatures of a typical New York power couple on their way up where the mother is self serving and the father a bit slimy.  It also shined a light on the real point of the story, that these children become accessories and are raised by caregivers who actually care about them, which is more than the parents could ever do.  I think the author is writing what she knows and the details show that this really is based on a reality so few of us know. I received this book from the publisher at no charge in exchange for my honest review.