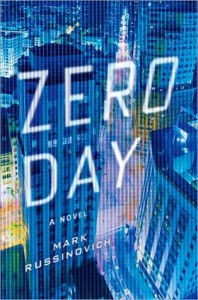 An airliner’s controls abruptly fail mid-flight over the Atlantic. An oil tanker runs aground in Japan when its navigational system suddenly stops dead. Hospitals everywhere have to abandon their computer databases when patients die after being administered incorrect dosages of their medicine. In the Midwest, a nuclear power plant nearly becomes the next Chernobyl when its cooling systems malfunction.
At first, these random computer failures seem like unrelated events. But Jeff Aiken, a former government analyst who quit in disgust after witnessing the gross errors that led up to 9/11, thinks otherwise. Jeff fears a more serious attack targeting the United States computer infrastructure is already under way. And as other menacing computer malfunctions pop up around the world, some with deadly results, he realizes that there isn’t much time if he hopes to prevent an international catastrophe.
Written by a global authority on cyber security, Zero Day presents a chilling “what if” scenario that, in a world completely reliant on technology, is more than possible today—it’s a cataclysmic disaster just waiting to happen.

MARK RUSSINOVICH works at Microsoft as a Technical Fellow, Microsoft’s senior-most technical position.  He joined the company when Microsoft acquired Winternals software, which he co-founded in 1996. He is also author of the popular Sysinternals tools. He is coauthor of the Windows Internals book series, a ontributing editor for TechNet Magazine, and a senior contributing editor for Windows IT Pro Magazine. He lives in Washington State.

Zero Day explores what could happen if some hackers are turned to true evil by terrorists.  It examines what could happen if a doomsday virus is sent to almost every computer in the western world and wonders if we are truly too dependent on them.  Jeff, a computer analyst, leaves his government job after they fail to act on intelligence that could have prevented 9/11.  He is called to help a law firm where a the doomsday virus has been triggered a month early by a wrong date in the system.  Realizing that there are severe consequences to the virus he has found, he calls in another colleague from the government, Daryl.  Jeff has always had feelings for her and the sparks fly again when they meet.

The pair try to unravel the threat by finding clues buried within the code and when several people involved with finding the clues are murdered, Jeff and Daryl realize that this is much more serious than a simple hacker trying to make a name for himself.  I never knew that unravelling computer code could be so sexy and thrilling!  This one made my heart pound and was a real page turner!  I loved how the author takes on the fact that we are so dependent on our computers and that fear translates well into a thriller. If you enjoy Michael Crichton and Stephen King, you are going to love this one.