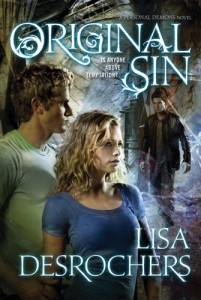 Luc Cain was born and raised in Hell, but he isn’t feeling as demonic as usual lately—thanks to Frannie Cavanaugh and the unique power she never realized she had. But you can’t desert Hell without consequences, and suddenly Frannie and Luc find themselves targeted by the same demons who used to be Luc’s allies.

Left with few options, Frannie and Luc accept the protection of Heaven and one of its most powerful angels, Gabe. Unfortunately, Luc isn’t the only one affected by Frannie, and it isn’t long before Gabe realizes that being around her is too…tempting. Rather than risk losing his wings, he leaves Frannie and Luc under the protection of her recently-acquired guardian angel.

Which would be fine, but Gabe is barely out the door before an assortment of demons appears—and they’re not leaving without dragging Luc back to Hell with them. Hell won’t give up and Heaven won’t give in. Frannie’s guardian exercises all the power he has to keep them away, but the demons are willing to hurt anyone close to Frannie in order to get what they want. It will take everything she has and then some to stay out of Hell’s grasp.

And not everyone will get out of it alive.

LISA DESROCHERS lives in central California with her husband and two very busy daughters. She can always be found with a book in her hand, and she adores stories that take her to new places and then take her by surprise. Growing up all over the United States inspired wanderlust and Desrochers loves to travel, which works out well since she lectures internationally on a variety of health care topics. Lisa Desrochers has a doctorate in physical therapy and maintains a full time practice. Original Sin is the second installment in the Personal Demons series.

I am going to try and keep this as spoiler free as I can. I had wanted to put a lot more into this review but didn’t feel it was fair to spill the beans this far out from the book’s release date.

At the end of Personal Demons, Luc is turned human somehow by Frannie, although no one is quite sure exactly how it happened.  Luc seems to think it was because of Frannie’s sway, her power to guide people mentally and bend towards her will.  The crux of the issue is that Frannie can still be swayed herself to good or evil, but Frannie favors the good. (YAY!)

Since Luc is now a former demon, his old demon buddies are now after him and Frannie since the evil doers have much use for Frannie and her ability to sway people.  The demons are downright hilarious and bumbling along with their evil intentions to get Luc back into hell and therefore control Frannie.  What the demons don’t count on is Gabe.  What Frannie doesn’t count on is her feelings for Gabriel.  Yep, we are back to square one with good versus somewhat evil. And Gabe doesn’t count on Frannie’s sway actually working on him. One tidbit:  we find out Frannie’s family history that helps explain her predicament.

There is a lot of action and emotions that run rampant through the story.  I really enjoyed this one as much as the first one.  This is killing me that I can’t just spill the whole thing, but I will say it is amazing and you need to preorder it now since you will want to read it the second it comes out.  My biggest problem now is that again I am left waiting for the next one in the series and I am super impatient about that.  Yes, it did end with another cliff hanger, sorry!

Parents:  There are some sexual situations in the book, some alcohol consumption, some drug references but nothing worse than what you can see on MTV right now.  I recommend this for older teens and adults.  This one totally rocks!