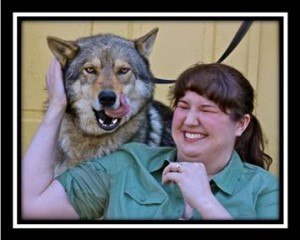 (It  looks like that wolf is kinda acting friendly with Molly! Her dachshunds will NOT approve!)
MOLLY RUNS WITH THE WOLVES!

When I was little and came running into the house, sweaty and caked in dirt, my mom would cry, “What the- have you been rolling around with wolves?”
Well, here I sit, sweaty, caked in various layers of dried mud.  And I have indeed been playing with wolves.  While promoting the release of my Naked Werewolf romance series, I visited the Wolf Run Wildlife Refuge in Nicholasville, KY.  Wolf Run, a state- and USDA-licensed non-profit educational facility, provides a safe, loving and permanent sanctuary for 23 adult wolves and wolf-dog hybrids. The refuge is also home to two full-grown lions, deer, goats, sheep, monkeys, and other exotic wildlife.  And Rowdy, the most obese raccoon I have ever seen.
Most of the animals are former pets that were either confiscated by or surrendered by their owners.  Because it turns out, wolf hybrids do not make great house pets.
As Savannah Massey, director of animal care and education at Wolf Run told me, “These animals are gorgeous, appealing and unique. But they’re also aggressive, destructive and territorial.  This is not an animal you want in your home.  Wolf genetics do not go away.  And it’s not just that they could tear up your furniture or hurt one of your other pets- you are physically in danger when you’re around them.”
Just what you want to hear when you’re sitting right next to one, and he’s been licking your face.
Honestly, Boone, a 10-year-old grey male, could not have been nicer during my visit and our subsequent photo shoot.  He was a dignified statesman compared to raucous Razz, a three-year-old tan specimen who seemed to think my make-up was bacon-flavored. (Note to Sephora, wolf-oriented face powder may be a niche market you haven’t considered yet.)
I learned a lot during my visit to Wolf Run.  I was happy to find there are some definite similarities between actual wolves and the characters in HOW TO FLIRT WITH A NAKED WEREWOLF and THE ART OF SEDUCING A NAKED WEREWOLF.
For instance, a wolf will pee on whatever it wants, whenever it wants, to make sure you know that thing belongs to them.   It is now your tree, Boone, we understand.  Thank you for not choosing my shoes.
Wolves have to date.  There are five packs at Wolf Run, each with three to five pack members.  New wolves are matched to potential packs based on temperament when they arrive at Wolf Run.  If the initial matches don’t work, they are moved to different packs until they find a good fit. Some wolves, like Boone, don’t fit well with any group and end up being loners. (Which, I think, makes him a bit like Cooper.)
Wolves struggle over the Alpha position.  Large males jockey for the position and it can lead to inter-pack tension.   Unlike Boone, who was an Alpha contender, Razz, just seemed to want to play, which made me think of Samson.  I did not see a real-life counterpart for Maggie, which was probably a good thing given her penchant for biting people on the butt.
Mary Kindred, CEO of Wolf Run, calls the animals her babies.  When she walks around the yard, any effort to distract the wolves is futile, because a) she is mom and b) she has Pupperoni in her pocket. Kindred noted that the sanctuary receives no outside funding, and all expenses, such sturdy fencing, food, veterinary care, and upkeep of the grounds, are paid through donations.  The facility welcomes volunteers.   And despite the love and effort Mary and her staff devote to the sanctuary, both she and Savannah look forward to the day they’re no longer needed.
“These animals shouldn’t be here,” Savannah said.  “The lions should be in Africa. The wolves should be in the wild.  Our goal is to rescue animals and educate the public, until a facility like this is no longer needed.”
To learn more about Wolf Run, go to http://www.wolfrun.org/index.html or contact Mary at ceoatwrwrhope@aol.com.
Click here to check out the trailer for Molly’s Naked Werewolf series: http://www.youtube.com/watch?v=eyHG5546Xa4
Wolf photo credit: Memories by Chris/Chris Meyer/Georgetown, KY http://web.me.com/memoriesbychris
Be sure to order your copies today!