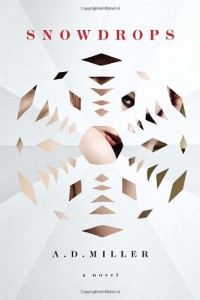 An intense psychological drama that echoes sophisticated entertainments like Gorky Park and The Talented Mr. Ripley.

Nick Platt is a British lawyer working in Moscow in the early 2000s—a place where the cascade of oil money, the tightening grip of the government, the jostling of the oligarchs, and the loosening of Soviet social mores have led to a culture where corruption, decadence, violence, and betrayal define everyday life. Nick doesn’t ask too many questions about the shady deals he works on—he’s too busy enjoying the exotic, surreally sinful nightlife Moscow has to offer.

One day in the subway, he rescues two willowy sisters, Masha and Katya, from a would-be purse snatcher. Soon Nick, the seductive Masha, and long-limbed Katya are cruising the seamy glamour spots of the city. Nick begins to feel something for Masha that he is pleased to think is love. Then the sisters ask Nick to help their aged aunt, Tatiana, find a new apartment.

Of course, nothing is as it seems—including this extraordi­nary debut novel. The twists in the story take it far beyond its noirish frame—the sordid and vivid portrayal of Moscow serves as a backdrop for a book that examines the irresistible allure of sin, featuring characters whose hearts are as cold as the Russian winter.

A. D. MILLER studied literature at Cambridge and Princeton, and worked as a television producer before joining the Economist. He has served as the magazine’s Moscow correspondent and is currently an editor in its London office. Snowdrops is his first novel.

I was thoroughly fascinated by this book.  I still can’t figure out why I liked it so much since the pace of the story was slow for me, but the writing is so perfectly beautiful that it will mesmerize you.  The story it written as a letter from an English lawyer named Nicholas to his fiance revealing an indiscretion that even he can’t truly explain except to say that he was used by a woman that had bewitched him.  Masha sails into Nicholas’ life and convinces him to help complete the sale of some property for an older woman.  The tale twists and turns between Russian mafia, unethical business men and the women who will steal more than just your credit card after a sexual romp.

Nick seems to be so intelligent and so fact conscious that it at first seems improbable that he could be used in a scam where Masha and Katya (possibly cousins) respond to his loneliness with taking him under their wing in order to help them illegally sell property that is owned by their “aunt”.  He explains to his girlfriend that he should have seen the scam coming, but couldn’t believe that someone might actually take advantage of him.  I found it very interesting to read the descriptions of corruption in Russia and how business is actually conducted.  I don’t know who to compare this story to since I don’t think I have ever read anything like it before.

WANT TO WIN A COPY OF THIS BOOK?
Contest is open to anyone over 13 years old with a US mailing address (no PO Boxes)
Contest ends on 4.16.11 Winner will be chosen by Random.org on 4.17.11
Winner will have 48 hours to respond to email or a new winner will be chosen.
This giveaway is sponsored by DoubleDay  and TWO copies will be available.