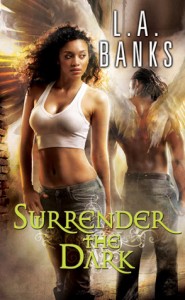 National bestselling author L.A. Banks’s electrifying new paranormal series is set in a sizzling world where Dark and Light are trapped in an eternal struggle for the fate of mankind. Celeste Jackson has fought all her life against a fog of hallucination and substance abuse, but it’s not until she meets her protector, Azrael, an angel who has left the safety of the Light, that she learns of the evil forces that have been trying to ruin her, and why. A fierce battle for control of the mortal realm is brewing, and only Celeste—with the help of the Remnant, her half-human, half-angel brethren—can stand in the way. Together, Celeste and Azrael must gather an army of sensitives to defeat the dark powers that have ruled humanity for centuries, but time is running out. If Azrael surrenders to his growing desire for Celeste, he risks being trapped among humanity forever. But the longer he stays, the harder she is to resist. To save the world, Celeste must draw on her own dark experiences with addiction to help Azrael overcome the one temptation that could possibly make him an eternal prisoner—his obsession with her.

New York Times best-selling author L.A. Banks has penned over 35 novels and 12 novellas in a wide range of genres. She was the recipient of the 2008 Essence Magazine Storyteller of the Year Award, as well as the 2008 Best 50 Women in Business Award for the State of Pennsylvania. Recently she was featured as a speaker on the HBO Special on Vampire Literature and Legends as a prelude to the True Blood premiere. She is most famous for her Vampire Huntress series, published by St. Martin’s Press. She lives in Philadelphia.

Finally a new series about angels for adults!  The young adult genre seems to have cornered the market with series about angels and demons, but now LA Banks serves up some hot ones just for the grown ups!  YAY!  There is a great deal of this story based on religion and steeped in spirituality with a battle to save earth at the crux of the tale.  There are two well known angels to those already reading books with angels: Celeste, who is having visions and tries to self medicate and Azrael who is sent to help her.  I really enjoyed this one and look forward to the next one.