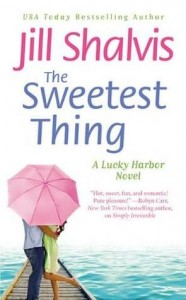 For The Sweetest Thing
By Jill Shalvis
Writing a romance called The Sweetest Thing, which centers around a decidedly NOT sweet heroine, amused me.  Tara Daniels is wound a little tight and likes things her way.  She’s also a former southern belle who appreciates the fact that she’s right.  A lot.
The Sweetest Thing?  Not exactly.
But her heart’s in the right place, always.  And, as it turns out, there’s a man who melts her like butter on a hot roll.  Not only that, he can soften her in a way that she isn’t sure she likes.  See, Tara thinks she has it all together, but it turns out she doesn’t.  She doesn’t know a lot about herself.  About all she has is the fact that she can cook like nobody’s business.  Oh, how she loves to cook.
Tara was a challenge for me.  Because here’s where I admit, I got a lot of her recipes from my husband.  True story.  I’m married to a big guy who works with his hands and is the ultimate Alpha Man — and yet he can cook.  Don’t try to figure him out, it’ll hurt your brain, trust me.
The recipe Good Morning Sunshine Casserole that Tara cooks in the book is all his.  Just don’t tell him I “borrowed” it and am telling the world that it’s my heroine’s.  It’d just go to his head.
P.S. For an ebook of Tara’s recipes, look for Heating Up The Kitchen wherever ebooks are sold.