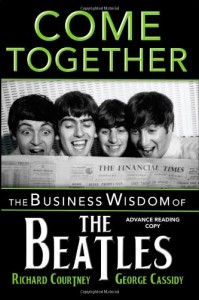 As the greatest rock and roll band of all time, the Beatles rocketed to worldwide fame soon after their 1964 arrival in the United States. Much of their achievement can be attributed to the unique Beatle sound, but it was more than just the music that catapulted them to the summit of success, and kept them there even after the band ceased touring and broke apart. How the Beatles both failed and triumphed as businessmen and the lessons today’s entrepreneurs and business leaders can draw from this unique journey is the subject of Come Together: The Business Wisdom of the Beatles. Authors Richard Courtney and George Cassidy recount the band’s many exploits, from its early struggles in Hamburg to the success of Sgt. Peppers Lonely Hearts Club Band and beyond, revealing from a business perspective what worked and what didn’t. More than the music, this book explores what it took to pass the audition.

The history of the Beatles are intertwined with a fascinating look at current business practicing.  I really think that this book would make a great gift for a recent high school or college graduate.  It is filled with easy to read and understand business theories in a way that will appeal to young adults in a very entertaining way.  The Beatles made such an impact on modern history and this is a wonderful way to combine the two.

Each chapter starts with a snippet of Beatle history and then relates that to a business idea.  I really thought the authors did a great job explaining how much practice (Hamburg) and effort (song writing) that the members of the group did in preparation for their world domination. There are touches of Malcom Gladwell that help explain the Beatles phenomenon as well.