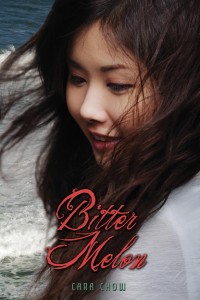 Frances, a Chinese-American student at an academically competitive school in San Francisco, has always had it drilled into her to be obedient to her mother and to be a straight-A student so that she can go to Med school.  But is being a doctor what she wants?  It has never even occurred to Frances to question her own feelings and desires until she accidentally winds up in speech class and finds herself with a hidden talent.  Does she dare to challenge the mother who has sacrificed everything for her?  Set in the 1980s.

Cara Chow was born in Hong Kong and grew up in the Richmond district of San Francisco, where Bitter Melon is set.  She attended an all girls’ Catholic high school, competed in speech, and had an encouraging speech coach, which served in part as the inspiration for her novel.  She was a PEN Emerging Voices Fellow in 2001. In addition to writing, Cara also teaches Pilates. She currently lives in the Los Angeles area with her husband and son. Bitter Melon is her first novel.

Every once in awhile I come across a book that really hits me emotionally and Cara Chow’s Bitter Melon is one of those books.  It filled me with pleasure, a bit of sadness and a some triumph.  The characters just jump off the page and the dialogue just flows perfectly.  This story is set in the 1980’s but you would only pick up on the decade once or twice since the story is really quite contemporary.  I loved how the author took on such themes as tradition and duty versus independence and individualism.

Frances finds herself in that in between world of family values and that teen need for independence.  She is expected to become a doctor and support her mother after graduation.  These plans go awry when Frances ends up in a speech class rather than the Berkley worthy class of calculus through a mistake. When Frances finds a natural talent for public speaking and is encouraged by her teacher, Ms. Taylor, she comes out of her subservient role and truly finds her own voice.

There are some moments in the book where you will find yourself weeping for the abuse that Frances endures from her mother, Gracie.  Gracie is set on raising Frances in a traditional Chinese way and only seeks monetary success for her daughter with no other options.  If you have read anything about the Tiger Mother controversy lately, this book will give you the point of view from a child’s perspective and how hard it is to live up to the expectations of the parents.

Gracie’s best friend, Nellie and her daughter, Theresa try to calm down Gracie and help Frances through the abuse they see but can’t truly act on since it is acceptable for the immigrant Chinese culture and for that matter most immigrant cultures through out history.  Theresa truly grows with the help she receives from Frances’ friendship and Nellie is just a fun romp with her enthusiasm for life.  This is a book that can be enjoyed by all family members and should spark some important discussions about teenage life.

WANT TO WIN THIS BOOK?
Go HERE for details!