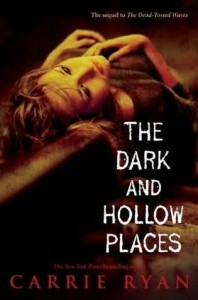 There are many things that Annah would like to forget: the look on her sister’s face when she and Elias left her behind in the Forest of Hands and Teeth, her first glimpse of the horde as they found their way to the Dark City, the sear of the barbed wire that would scar her for life. But most of all, Annah would like to forget the morning Elias left her for the Recruiters.

Annah’s world stopped that day and she’s been waiting for him to come home ever since. Without him, her life doesn’t feel much different from that of the dead that roam the wasted city around her. Then she meets Catcher and everything feels alive again.

Except, Catcher has his own secrets — dark, terrifying truths that link him to a past Annah’s longed to forget, and to a future too deadly to consider. And now it’s up to Annah — can she continue to live in a world drenched in the blood of the living? Or is death the only escape from the Return’s destruction?

Born and raised in Greenville, South Carolina, CARRIE RYAN is a graduate of Williams College and Duke University Law School. She currently lives in Charlotte, North Carolina. You can visit her at CarrieRyan.com.

**slight spoilers — don’t read the beyond the first paragraph!**

This was such a wonderful conclusion to this series.  I didn’t expect it to end this way, but it slowly built up to the ending and everything seemed to fall into place.  There, did I pique your interest? I am trying not to give anything away, so I will just say that those of you who adore this series will not be disappointed with this last book in the series.  To me, this was the best of the series.

There is a lot of action and cliff hangers built into the majority of chapters and it was a really quick read for me.  Annah and Gabry, along with Elias and Catcher fight there way through the forest and this lands them in the Dark City where Annah and Gabry come face to face finally.  There appears to be a love quadrangle between the four of them through out most of this book and the conclusion of that will be twist you won’t forget.

The first two books have little clues about the outcome of the book, so be sure to take note.  I reread the first two books, to remember everything.  One of the downfalls of having a series spaced out a year apart is that you can forget the details that turn out to an important factor in the outcome.  This is just a beautifully written series that should appeal to older teens and adults.  I am sad to see it go, but there was a little bit of an opening to possibly have another one.  Maybe?  PLEASE!