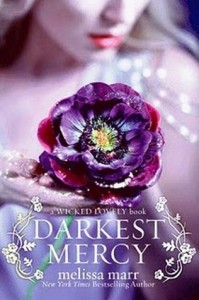 The Summer King is missing; the Dark Court is bleeding; and a stranger walks the streets of Huntsdale, his presence signifying the deaths of powerful fey.
Aislinn tends to the Summer Court, searching for her absent king and yearning for Seth. Torn between his new queen and his old love, Keenan works from afar to strengthen his court against the coming war. Donia longs for fiery passion even as she coolly readies the Winter Court for battle. And Seth, sworn brother of the Dark King and heir to the High Queen, is about to make a mistake that could cost his life.
Love, despair, and betrayal ignite the Faery Courts, and in the final conflict, some will win . . . and some will lose everything.
The thrilling conclusion to Melissa Marr’s New York Times bestselling Wicked Lovely series will leave readers breathless.

The series ended exactly how it was supposed to.  Well, at least I was happy about it.  I felt that Melissa Marr wrapped up the series with a reasonable plot line and that all loose threads were tied together.  It may not be the ending some people were looking for but it worked for me.  The story does flip around with each character given their own time in the sun and point of view.

You find out what Seth really is, what Niall really wants, what happens to Irial and of course the queens.  Donia and Aislinn have come to an understanding and compromise that in turn makes them each stronger.  Keenan find his own place in the world. I did miss some of the minor characters like Leslie although she does make a brief appearance.  The Hounds figure somewhat prominently in the story like Baranach.  I thought this was a real page turner with lots of action and a little romance.