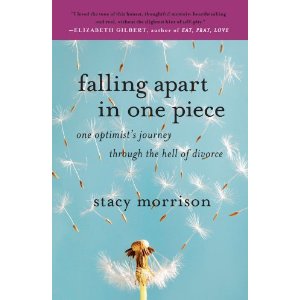 The emotionally charged story of a divorce that brought the surprising gift of grace Just when Stacy Morrison thought everything in her life had come together, her husband of ten years announced that he wanted a divorce. She was left alone with a new house that needed a lot of work, a new baby who needed a lot of attention, and a new job in the high-pressure world of New York magazine publishing.
Morrison had never been one to believe in fairy tales. As far as she was concerned, happy endings were the product of the kind of ambition and hard work that had propelled her to the top of her profession. But she had always considered her relationship with her husband a safe place in her often stressful life. All of her assumptions about how life works crumbled, though, when she discovered that no amount of will and determination was going to save her marriage.
For Stacy, the only solution was to keep on living, and to listen—as deeply and openly as possible—to what this experience was teaching her.
Told with humor and heart, her honest and intimate account of the stress of being a working mother while trying to make sense of her unraveling marriage offers unexpected lessons of love, forgiveness, and dignity that will resonate with women everywhere.

Stacy Morrison is the editor in chief of Redbook magazine. Under her guidance, the magazine has found new vibrancy and relevance for today’s generations, winning a Folio award for General Excellence (2005), a Clarion award for General Excellence (2007), and a National Magazine Award nomination for Personal Service (2006). She has appeared as an expert on women, love, sex, money and more on the Today Show, CNN Headline News, CNN Moneyline, and The Early Show, among many other TV programs.
Before becoming editor in chief of Redbook magazine, she was Executive Editor at Marie Claire, working on the international advocacy projects, and had previously been the editor in chief of Modern Bride magazine and the venture-funded dot.com/magazine about design, One (which won three Ozzie awards in its short lifespan). She was also a part of the launches of Conde Nast Sports for Women, Time Out New York, and Mirabella magazine.
She lives in Brooklyn with her 4-year-old son, Zack, whose father is at the house many, many times a week.

Sigh, I knew this book would bring tears to my eyes and at points, it did.  The best books always evoke some sort of emotion and this one will have you on a roller coaster.  I could feel all of the highs and lows of Stacy Morrison’s divorce play out and how she kept putting one foot in front of the other.  This is THE book for anyone going through a divorce,  especially with young children, so you won’t feel alone.  Actually, this is a great study in the female reaction to a divorce told with a positive outlook of trying to a life back on track after the devastation.

I know so many people who have been through divorce and you never think that it will happen to you, much like what happened to Stacy Morrison.  Stacy’s writing is just so easy to read that it makes you feel like you are there while it is happening.  She also doesn’t live anything off the table and shows all of her mistakes as well as those of her ex.  She goes the extra step of insuring that she stays friends with her son’s father for his sake rather than becoming bitter and reactive to his father’s abandonment.  If you are a fan of memoirs, like I am, you will love this book!

Be sure to read the Q&A with Stacy Morrison HERE

WANT TO WIN A COPY OF THIS BOOK?
Contest is open to anyone over 13 years old with a US mailing address (no PO Boxes)
Contest ends on 3.30.11 Winner will be chosen by Random.org on 3.31.11
Winner will have 48 hours to respond to email or a new winner will be chosen.
This giveaway is sponsored by Simon & Schuster and ONE copy will be available.