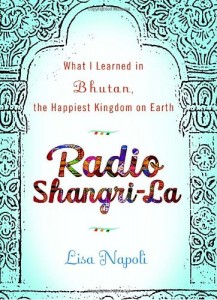 Lisa Napoli was in the grip of a crisis, dissatisfied with her life and her work as a radio journalist. When a chance encounter with a handsome stranger presented her with an opportunity to move halfway around the world, Lisa left behind cosmopolitan Los Angeles for a new adventure in the ancient Himalayan kingdom of Bhutan—said to be one of the happiest places on earth.

Long isolated from industrialization and just beginning to open its doors to the modern world, Bhutan is a deeply spiritual place, devoted to environmental conservation and committed to the happiness of its people—in fact, Bhutan measures its success in Gross National Happiness rather than in GNP. In a country without a single traffic light, its citizens are believed to be among the most content in the world. To Lisa, it seemed to be a place that offered the opposite of her fast-paced life in the United States, where the noisy din of sound-bite news and cell phones dominate our days, and meaningful conversation is a rare commodity; where everyone is plugged in digitally, yet rarely connects with the people around them.

Thousands of miles away from everything and everyone she knows, Lisa creates a new community for herself. As she helps to start Bhutan’s first youth-oriented radio station, Kuzoo FM, she must come to terms with her conflicting feelings about the impact of the medium on a country that had been shielded from its effects. Immersing herself in Bhutan’s rapidly changing culture, Lisa realizes that her own perspective on life is changing as well—and that she is discovering the sense of purpose and joy that she has been yearning for.

In this smart, heartfelt, and beautifully written book, sure to please fans of transporting travel narratives and personal memoirs alike, Lisa Napoli discovers that the world is a beautiful and complicated place—and comes to appreciate her life for the adventure it is.

LISA NAPOLI is a journalist whose last staff job was on the public radio show Marketplace. An early chronicler of the dawn of the World Wide Web as a columnist at the New York Times CyberTimes, she has also been the Internet correspondent at MSNBC. She began her career at CNN, worked in local news in North Carolina, and has directed several documentaries about Southern culture. www.LisaNapoli.com

When the author finds herself at a cross road in her life and receives an invitation to consult a fledgling radio station at the ends of the earth in Bhutan, she takes a giant leap of faith and gets on a plane.  Bhutan is known as The Happiest Place on Earth and by the end of her story, you understand why.  The people don’t worry about what they don’t have only about what they do have.  No one in the country is homeless, there is no hunger and everyone is given an opportunity to get an education.  The monarchy there has a goal to become a democratic society and Napoli, in a small way, is part of the process through the radio station.

Radio Kuzoo, named for the Bhutan expression for hello, becomes a hit with the public, especially the youth.  There is even an American Idol type competition for Valentines Day.  I think that was the most shocking event since this Buddhist country celebrated it and knew what American Idol was.  The country has been cut off from outside media until 1999.  Napoli was worried that the outside forces would have a negative impact on the agrarian society and in a way she is probably right.

Lisa Napoli’s memoir, Radio Shangri La,  goes above and beyond the typical travel monologue.  I was utterly fascinated by the people she met and the sights she saw.  I was a bit disappointed that there were no pictures at all in the book.  Her descriptions of the landscape were awe inspiring and sent me off to google the sites.  Her blog does contain a few pictures, so be sure to check those out since they help bring the story to life.

WANT TO WIN A COPY OF THIS BOOK?
Contest is open to anyone over 13 years old with a US or Canadian mailing addresses (no PO Boxes)
Contest ends on 3.28.11 Winner will be chosen by Random.org on 3.29.11
Winner will have 48 hours to respond to email or a new winner will be chosen.
This giveaway is sponsored by the Crown Publishing  and TWO copies will be available.