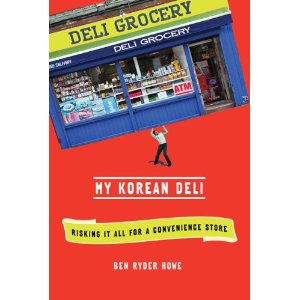 This warm and funny tale of an earnest preppy editor finding himself trapped behind the counter of a Brooklyn convenience store is about family, culture and identity in an age of discombobulation.
It starts with a gift, when Ben Ryder Howe’s wife, the daughter of Korean immigrants, decides to repay her parents’ self-sacrifice by buying them a store. Howe, an editor at the rarefied Paris Review, agrees to go along. Things soon become a lot more complicated. After the business struggles, Howe finds himself living in the basement of his in-laws’ Staten Island home, commuting to the Paris Review offices in George Plimpton’s Upper East Side townhouse by day, and heading to Brooklyn at night to slice cold cuts and peddle lottery tickets. My Korean Deli follows the store’s tumultuous life span, and along the way paints the portrait of an extremely unlikely partnership between characters with shoots across society, from the Brooklyn streets to Seoul to Puritan New England. Owning the deli becomes a transformative experience for everyone involved as they struggle to salvage the original gift—and the family—while sorting out issues of values, work, and identity.

Ben Ryder Howe has written for The New Yorker, The Atlantic Monthly, and Outside, and his work has been selected for Best American Travel Writing. He is a former senior editor of The Paris Review. He, his wife, and their two children live on Staten Island. This is his first book.

This book was totally unexpected.  I didn’t really read the description of the book, but since I love to read off beat memoirs, I thought, sure, why not?  Just from the title alone, I was only counting on a person and their dive into the deep end of self employment retail hell, but I got so much more.  This is no simple story about marriage and retail partnership either since it delves into intercultural relationships as well.

Howe marries into a Korean family and they are known for their industrious attitude towards work.  His mother in law steals the show though with her Yoda like proclamations about life and how everything needs to be done NOW, preferably before NOW!  Gab, Howe’s wife feels that she hasn’t accomplished anything compared to her mother and even though she has a law degree, she is driven to make it in the deli world.  I never knew how difficult city bureaucracy and fines can make or break a small business.  And if they don’t get you, the vendors will.

I really thought that the most eloquent parts of this book were Howe’s interactions with his day job boss, George Plimpton at the Paris Review.  Howe descriptions of Plimpton and his interactions are comedic jewels.  Plimpton exclaims that he would love to work a shift as a “stocker” when the store is open is priceless.  Overall, this is a sweet memoir about how a family can pull together and make things work.  I received this book at no expense in exchange for my honest review.