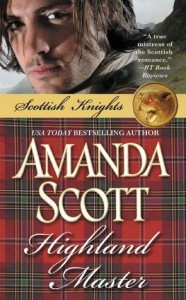 When eighteen-year-old Lady Catriona Mackintosh discovers a wounded man in the forest near her Highland home, little does she know that he has sworn a sacred oath to kill her father and other members of the powerful Highland confederation known as Clan Chattan. Nor does she realize that she has met her soul mate. Independent, competent, intelligent, fiercely proud of her heritage, determined always to live near her own family, and known to her family as the “wee wildcat” because of her quick temper, Catriona is the daughter of a Highland chieftain and granddaughter of the even more powerful Chief (or Captain) of Clan Chattan. But her life changes forever when she persuades Sir Finlagh Cameron to return with her to her home to recover from his wounds.

Sir Finlagh “Fin” Cameron is on a mission for the heir to Scotland’s throne, who has sent him to the Highlands to persuade the Chief of Clan Chattan to arrange a secret meeting for him with two other great lords (the Lord of the Isles and the Lord of the North). Until Fin meets Catriona, however, he has no idea that her father was the Clan Chattan war leader who led them in the battle that wiped out many of Clan Cameron’s best warriors, including Fin’s own father. The sole survivor of that battle, Fin accepted a bequest of vengeance from his dying father, providing him with a dilemma to face as he begins to fall in love with Catriona. He is not the only one enticed by her charms, either. There are two other contenders, one of whom is his own master, the heir to Scotland’s throne. With royal mischief afoot, if Catriona and Fin are ever to find happiness, they must first avoid disaster that could change Scotland’s history, and find ways to be open and honest with each other. (2011)

Amanda Scott is a USA Today bestselling and award-winning author. She has won the Romance Writers of America’s RITA/Golden Medallion awards and both a Career Achievement Award and the Reviewers’ Choice Award for Best Scottish Historical (for her 2008 novel Border Wedding) from Romantic Times. She began writing on a dare from her husband. That resulted in her first book, The Fugitive Heiress. ­­Highland Master is her fifty-fifth book.

Amanda is a fourth-generation Californian who was born and raised in Salinas. She has a Bachelor’s Degree in history from Mills College in Oakland and a Master’s in History from San Jose State University. She has long specialized in British history and is a fellow of the Society of Antiquaries of Scotland. Amanda lives with her husband in northern California and has a married son, who is a firefighter. You may visit her Web site at http://www.amandascottauthor.com.

This is the start of a new trilogy called the Scottish Knights and it starts off wonderfully.  This one takes place in the 1400’s and  there are quite a few plot twists to keep the story of Catriona and Fin moving right along.  Catriona is young and headstrong and she saved Fin from an arrow years before.  Fin is dealing with intrigue and finds himself taken with Catriona. I love how Amanda Scott makes the characters speak with an accent.  I really feel I that brogue down by the end of the book.  I received this book at no charge from the publisher in exchange for my honest review.

Contest ends on 3.16.11 Winner will be chosen by Random.org on 3.17.11
Winner will have 48 hours to respond to email or a new winner will be chosen.
This giveaway is sponsored by Forever Romance and up to three copies will be available.
Only one winner per household address!
Enter as many contests as you want but you can only win one copy of the book.

+1 Be my friend on GoodReads HERE
+1 Follow me on Twitter HERE
More Extra Entries
+1 Check out Amanda Scott’s site at http://www.amandascottauthor.com/
+1 Fan on Goodreads HERE
+1 Post about this giveaway on your social networking site and leave me a link here.  You can do this daily and receive an entry for each link you leave.  One per day per site.
+1 Blog about this giveaway and leave me a link