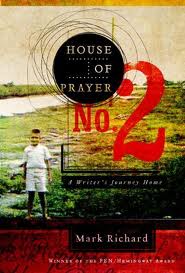 In this otherworldly memoir of extraordinary power, Mark Richard, an award-winning author, tells his story of growing up in the American South with a heady Gothic mix of racial tension and religious fervor.

Called a “special child,” Southern social code for mentally—and physically—challenged children, Richard was crippled by deformed hips and was told he would spend his adult life in a wheelchair. During his early years in charity hospitals, Richard observed the drama of other broken boys’ lives, children from impoverished Appalachia, tobacco country lowlands, and Richmond’s poorest neighborhoods. The son of a solitary alcoholic father whose hair-trigger temper terrorized his family, and of a mother who sought inner peace through fasting, prayer, and scripture, Richard spent his bedridden childhood withdrawn into the company of books.

As a young man, Richard, defying both his doctors and parents, set out to experience as much of the world as he could—as a disc jockey, fishing trawler deckhand, house painter, naval correspondent, aerial photographer, private investigator, foreign journalist, bartender and unsuccessful seminarian—before his hips failed him.  While digging irrigation ditches in east Texas, he discovered that a teacher had sent a story of his to the Atlantic, where it was named a winner in the magazine’s national fiction contest launching a career much in the mold of Jack London and Mark Twain.

A superbly written and irresistible blend of history, travelogue, and personal reflection, House of Prayer No. 2 is a remarkable portrait of a writer’s struggle with his faith, the evolution of his art, and of recognizing one’s singularity in the face of painful disability.  Written with humor and a poetic force, this memoir is destined to become a modern classic.

MARK RICHARD is the author of two award-winning short story collections, The Ice at the Bottom of the World and Charity, and the novel Fishboy. His short stories and journalism have appeared in the New York Times, The New Yorker, Harper’s, Esquire, Vogue, and GQ. He is the recipient of the PEN/Hemingway Award, a National Endowment for the Arts fellowship, and a Whiting Foundation Writer’s Award. He lives in Los Angeles with his wife and their three sons.

I have to say that I was totally charmed by this memoir.  It is written in second person, which I think is a first for me.  To paraphrase Double Day, it is part Southern Gothic mixed with Running With Scissors and I was compelled to read it straight through.  I can’t say it is completely different than anything I have ever read, but most of those books were fiction.  I just found his whole life fascinating and he made the challenges that he face in life – crushing pain from bad hips, multiple surgeries that sounded barbaric, and horrible family life — part of the inevitable process of life which he lives to the fullest.

Contest ends on 3.9.11 Winner will be chosen by Random.org on 3.10.11
Winner will have 48 hours to respond to email or a new winner will be chosen.
This giveaway is sponsored by Double Day Publishing and TWO copies of the book will be available.
Limit one winner per household/mailing address.