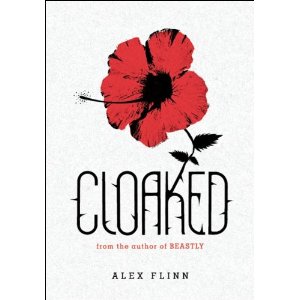 I’m not your average hero. I actually wasn’t your average anything. Just a poor guy working an after-school job at a South Beach shoe repair shop to help his mom make ends meet. But a little magic changed it all.
It all started with a curse. And a frognapping. And one hot-looking princess, who asked me to lead a rescue mission.
There wasn’t a fairy godmother or any of that. And even though I fell in love along the way, what happened to me is unlike any fairy tale I’ve ever heard. Before I knew it, I was spying with a flock of enchanted swans, talking (yes, talking!) to a fox named Todd, and nearly trampled by giants in the Everglades.
Don’t believe me? I didn’t believe it either. But you’ll see. Because I knew it all was true, the second I got cloaked.

Alex Flinn loves fairy tales and is also the author of Beastly, a modern retelling of Beauty and the Beast that is a feature film starring Vanessa Hudgens, and A Kiss in Time, an edgy twist on Sleeping Beauty. Her other books include Breathing Underwater, an ALA Top 10 Best Book for Young Adults, Breaking Point, Nothing to Lose, Fade to Black, and Diva. She lives in Miami with her husband, two kids, a cat, and a dog.

This is such a sweet story and a mash up of a bunch of unloved fairy tales, a few of which, I have actually read.  Johnny is working at the family shoe repair and designs shoes in his spare time at a swanky South Beach Hotel.  Things are not going well his family since his father disappeared, his mother is working two jobs and they are having trouble paying the bills. One day, a princess checks into the hotel and Johnny thinks if he can only meet her, he can change his fortunes.  Of course, the princess breaks her shoe and arranges a meeting with the young cobbler.  In order to win her hand, he must help find her brother who was turned into a frog by an evil witch.  In exchange, the princess offers a reward and marriage that will help ease life for him and his mother.

So the trial begins and Johnny goes on a quest to find the Frog Prince.  He has to jump through several hoops to find the prince and to help him, the princess has given him a magical cloak which will transport him to where ever he needs to be.  His best friend,  Meg, also has some magic up her sleeve and helps Johnny on the quest which takes you through several fairy tales like The Six Swans, The Elves and the Shoemaker, The Valiant Tailor, The Golden Bird, and of course, The Frog Prince.

There are truly sweet and touching moments as well as a few good laughs.  This is probably safe for younger teens with just a touch of violence, some kissing, a bit of alcohol use and good old fashioned romance.  Of course Johnny ends up with the girl of his dreams who has been beside him all along.  Oh, and the princess does help Johnny out in the end by publicizing his creations.   I received this book at no charge from the publisher in exchange for my honest review.