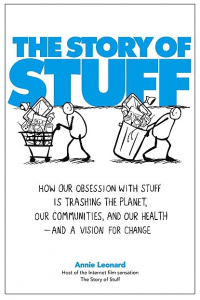 We have a problem with Stuff. With just 5 percent of the world’s population, we’re consuming 30 percent of the world’s resources and creating 30 percent of the world’s waste. If everyone consumed at U.S. rates, we would need three to five planets!
This alarming fact drove Annie Leonard to create the Internet film sensation The Story of Stuff, which has been viewed over 10 million times by people around the world. In her sweeping, groundbreaking book of the same name, Leonard tracks the life of the Stuff we use every day—where our cotton T-shirts, laptop computers, and aluminum cans come from, how they are produced, distributed, and consumed, and where they go when we throw them out. Like Rachel Carson’s Silent Spring, The Story of Stuff is a landmark book that will change the way people think—and the way they live.
Leonard’s message is startlingly clear: we have too much Stuff, and too much of it is toxic. Outlining the five stages of our consumption-driven economy—from extraction through production, distribution, consumption, and disposal—she vividly illuminates its frightening repercussions. Visiting garbage dumps and factories around the world, Leonard reveals the true story behind our possessions—why it’s cheaper to replace a broken TV than to fix it; how the promotion of “perceived obsolescence” encourages us to toss out everything from shoes to cell phones while they’re still in perfect shape; and how factory workers in Haiti, mine workers in Congo, and everyone who lives and works within this system pay for our cheap goods with their health, safety, and quality of life. Meanwhile we, as consumers, are compromising our health and well-being, whether it’s through neurotoxins in our pillows or lead leaching into our kids’ food from their lunchboxes—and all this Stuff isn’t even making us happier! We work hard so we can buy Stuff that we quickly throw out, and then
we want new Stuff so we work harder and have no time to enjoy all our Stuff. . . . With staggering revelations about the economy, the environment, and cultures around the world, alongside stories from her own life and work, Leonard demonstrates that the drive for a “growth at all costs” economy fuels a cycle of production, consumption, and disposal that is killing us.
It is a system in crisis, but Annie Leonard shows us that this is not the way things have to be. It’s within our power to stop the environmental damage, social injustice, and health hazards caused by polluting production and excessive consumption, and Leonard shows us how. Expansive, galvanizing, and sobering yet optimistic, The Story of Stuff transforms how we think about our lives and our relationship to the planet.

Annie Leonard is an expert in international sustainability and environmental health issues, with more than 20 years of experience investigating factories and dumps around the world. She’s taking time off from her other work to write the book, but until recently she was coordinator of the Funders Workgroup for Sustainable Production and Consumption, communicating worldwide about the impact of consumerism and materialism on global economies and international health. Annie’s efforts over the past two decades to raise awareness about international sustainability and environmental health issues has included work with Global Anti-Incinerator Alliance (GAIA), Health Care without Harm, Essential Information and Greenpeace International. She serves on the boards of GAIA, the International Forum for Globalization and the Environmental Health Fund. Annie has written about international environmental issues for a range of public interest audiences and will step this up and broaden her reach with op eds and features around publication time. She’s appeared on radio and TV in the U.S. and other countries many times over the past 20 years. She had extensive media training and exposure during her tenure at Greenpeace. She’s testified in front of Congress, been interviewed on CNN, publicly debated a US State Department representative, and done hundreds of public presentations. In 2008, Annie was named one of Time magazine’s Heroes of the Environment.
Annie did her undergraduate studies at Barnard and graduate work in city and regional planning at Cornell. She has traveled to 40 countries, including Haiti, Bangladesh, India, the Philippines, Pakistan and South Africa, in her work investigating and promoting anti-pollution issues internationally. Annie currently resides in California with her daughter.

The Story of Stuff isn’t exactly a page turner, it will make you think about stuff and how it impacts your daily life.  Stuff can either make or break this planet and at the present time, it looks pretty negative.  This handbook will help you understand and figure out what you can do to make your world better.  I think that the author has a lot of things right in this book.  Television causes people to increase their wants and not necessarily their needs.

Annie Leonard explains how each step of the manufacturing process creates waste and the chemicals involved are poisoning us and the earth.  So far, I think there has been several things in the book, like certain plastics that are now being outlawed.  She sites one idea that mailing back unrecyclable items back to the manufacturer to protest.  However, I don’t see how mailing back items to manufactures can make them stop manufacturing the item.  That seems like a waste of energy to me.