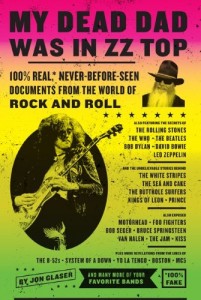 An irreverent and ridiculous collection of “found” documents that will change everything you thought you knew about rock and roll, by the creator and star of Adult Swim’s Delocated
Jon Glaser delves into the unknown and highly secretive histories of dozens of rock and roll’s greatest bands with sometimes spectacular, sometimes heartbreaking, always completely made-up results. In this book, you’ll discover the following:

MY THOUGHTS
LOVED IT — THIS BOOK ROCKED!

I think this book is what happens when you mix a rock nerd with some photoshop skills, some old paper and the ability to think in the absurd.     The “lost” lyrics are spectacular and I have a feeling that they probably could have been the actual lyrics in some cases.  My all time favorite is the letter from Ringo telling his mates that he is starting a Beatles Tribute band, which is something that isn’t really so far from the truth with his All Starr Band.  This is one of those books that are coffee table worthy.  It would also make the perfect gift for that uncle you never know what to buy. I received this book at no cost from the publisher in exchange for my honest review.