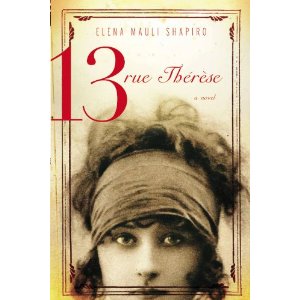 American academic Trevor Stratton discovers a box full of artifacts from World War I as he settles into his new office in Paris. The pictures, letters, and objects in the box relate to the life of Louise Brunet, a feisty, charming Frenchwoman who lived through both World Wars.
As Trevor examines and documents the relics the box offers up, he begins to imagine the story of Louise Brunet’s life: her love for a cousin who died in the war, her marriage to a man who works for her father, and her attraction to a neighbor in her building at 13 rue Thérèse. The more time he spends with the objects though, the truer his imaginings of Louise’s life become, and the more he notices another alluring Frenchwoman: Josianne, his clerk, who planted the box in his office in the first place, and with whom he finds he is falling in love.

Elena Mauli Shapiro was born and raised in Paris, France, in an apartment below the real-life Louise Brunet’s. She has a BA from Stanford University in English and French, an MFA in Fiction Writing from Mills College, and an MA in Comparative Literature from UC Davis. This novel was a finalist for the 2009 Bakeless literary prize.

This is a beautifully illustrated story that forces the reader to use their imagination.  The author uses an immense imagination by taking a box of found objects and creates a tale around them.  You can see all of the items at www.13ruetheres.com  I received an advance copy of this from the publisher and I am told the finished book is an absolute marvel.  I had to go to the book’s website to get the full effect of the items.

The story itself is about romance and how flirtations are sometimes taken to the next level and is told through the found objects.  The story actually has two romances going on.  First between Trevor who becomes owned by the objects and Josianne, his clerk that gives him the box.  Mirroring this attraction is the one of Louise and her husband that quickly leads to an affair with a new neighbor.