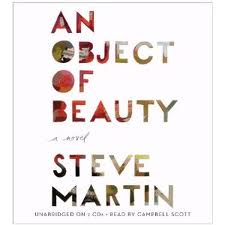 Lacey Yeager is young, captivating, and ambitious enough to take the NYC art world by storm. Groomed at Sotheby’s and hungry to keep climbing the social and career ladders put before her, Lacey charms men and women, old and young, rich and even richer with her magnetic charisma and liveliness. Her ascension to the highest tiers of the city parallel the soaring heights–and, at times, the dark lows–of the art world and the country from the late 1990s through today.

Steve Martin is a legendary writer, actor, and performer. His film credits include Father of the Bride, Parenthood, The Spanish Prisoner, and Bringing Down the House, as well as Roxanne, L.A. Story, and Bowfinger, for which he also wrote the screenplays. He’s won Emmys for his television writing and two Grammys for comedy albums. In addition to a play, Picasso at the Lapin Agile, he has written a bestselling collection of comic pieces, Pure Drivel, and a bestselling novella, Shopgirl, which was made into a movie. His work appears frequently in The New Yorker and The New York Times.

This spare, focused book takes us back to the late 1990s, when art was a commodity for the very wealthy and a coin of the realm for admission to the upper class. It’s a character study, a light mystery, and an entertaining look at a world that few people see up close. Campbell Scott is an inspired choice as narrator. His measured, understated tone captures the essence of the book, and he only slightly changes his for voice its characters. His leisurely pace draws our attention to the plot details and illuminates the author’s asides about the art world. What’s even more impressive, though, is that Scott actually sounds like Steve Martin. It’s uncanny, and it works beautifully. R.I.G. © AudioFile 2010, Portland, Maine

I normally tear through Steve Martin’s stories, but this one had a lot of information about international art trade and the New York art scene.  I really had to absorb the information to understand all of the plot points. The story revolves around Lacey and I am not really sure if she is good or bad, so I suppose like most people she has a bit of both.  Daniel is more of a narrator than actual character although he does tell the story from an observer’s point of view and acts as a voice of reason even when he finds Lacey has used him in one of her schemes.

A key point that is when Lacey finds out the biggest new name in art is a former boyfriend using the moniker of Pilot Mouse and of course Lacey uses that to her advantage, playing upon the giant egos that exist when money and objects collide.  Martin lampoons people who buy art for no other reason than to own it.  He explained this syndrome rather well when he appeared on the Colbert Report recently.  This is overall of Martin’s more in depth books and it is well worth reading.
I received this book at no charge from the publisher in exchange for my honest review.

Contest ends on 2.19.11 Winner will be chosen by Random.org on  2.20.11
Winner will have 48 hours to respond to email or a new winner will be chosen.
This giveaway is sponsored by Hachette Book Group and up to 2 audio books will be available.
Only one winner per household address!