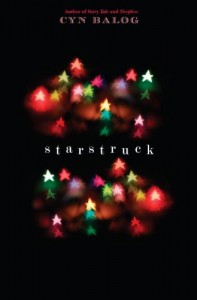 Gwendolyn “Dough” X doesn’t think she has much going for her—she carries a few extra pounds, her family struggles with their small bakery in a town full of millionaires, and the other kids at her New Jersey high school don’t seem to know that she exists. Thank the stars for her longtime boyfriend, Philip P. Wishman—or “Wish.” He moved away to California three years ago, when they were 13, but then professed his love for her via e-mail, and he’s been her long-distance BF ever since.
At the beginning of her junior year, though, Wish e-mails that he’s moving back to Jersey. Great, right? Well, except that Dough has gained about 70 pounds since the last time Wish saw her, while Wish—according to his Facebook photos—has morphed into a blonde god. Convinced that she’ll be headed for Dumpsville the minute Wish lays eyes on her, Dough delays their meeting as long as she possibly can.
But when she sees Wish at school, something amazing happens. He looks at Dough like she’s just as gorgeous as he is. But Wish is acting a little weird, obsessed with the sun and freaked out by rain. And the creepy new guy working at the bakery, Christian, is convinced that there’s more to Wish’s good looks than just healthy eating and lots of sun. He tells Dough that a mark on Wish’s neck marks him as a member of the Luminati—an ancient cult of astrologers who can manipulate the stars to improve their lives. Is Wish and Dough’s love meant to be—or are they star-crossed?

CYN BALOG has been a California girl and a Maine girl, but she’s first and foremost a Jersey girl. No matter where she’s lived, she’s been writing.  Now, she’s the Race and Event Manager for Runner’s World, Running Times, and Bicycling magazines.  Which means that when she’s not writing, she’s probably either running or trying unsuccessfully to solve a Sunday New York Times crossword puzzle from 2003.  She lives in Pennsylvania with her husband and infant daughter.

MY THOUGHTS
LOVE IT

Do looks matter?  Are they worth compromising your life in order to appear as something you are not?  These ideas are explored in Starstruck.  I read this one straight through and really enjoyed it.  I thought Gwendolyn “Dough” is very likable and sympathetic although she doesn’t make you feel sorry for her.  She knows she has gained weight and doesn’t look like she did when her best friend, Wish, moves to California.  Wish has his own secrets and feels as unloved as Dough does, except he has a secret about his appearance.  Having a gorgeous, thin,  younger sister, Evie, doesn’t help her self esteem either.

Dough is constantly berating herself for her weight and when Christian comes to work in the bakery with her, she finds he doesn’t talk down to her and treats her as a normal person.  I think Dough takes quite a bit away from her talks with Christian even though he is a minor character.  He helps Dough solve the mystery around her boyfriend.  Things get weird when Wish moves back to New Jersey from California and looks like a movie star.  He doesn’t seem to notice that Dough has changed.  Dough flirts with the popular group through Wish and finds that they are as shallow as she has imagined.

The ending caught me a bit off guard and it is pretty magical. I think this is best suited for teens over 14 and there are mentions of sexual situations, underage drinking and sexual situations although nothing graphic. I received this book at no charge from Book It Forward in exchange for my honest review.