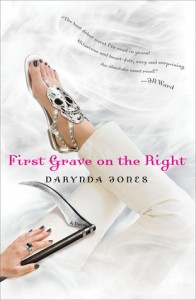 A smashing, award-winning debut novel that introduces Charley Davidson: part-time private investigator and full-time Grim Reaper Charley sees dead people. That’s right, she sees dead people. And it’s her job to convince them to “go into the light.” But when these very dead people have died under less than ideal circumstances (i.e. murder), sometimes they want Charley to bring the bad guys to justice. Complicating matters are the intensely hot dreams she’s been having about an Entity who has been following her all her life…and it turns out he might not be dead after all. In fact, he might be something else entirely. This is a thrilling debut novel from an exciting newcomer to the world of paranormal romantic suspense.

DARYNDA JONES lives in the Land of Enchantment, also known as New Mexico, with her husband of more than twenty-five years and two beautiful sons, aka the Mighty, Mighty Jones Boys.

Smart, sophisticated, sexy, snarky, snazzy, special, well, you get the point and I can’t think of any more adjectives that start with “s” to describe the book any more.  Imagine if MaryJanice Davidson and Lisa Lutz wrote a book together about a paranormal P.I. that is part Spellman Files and Queen Betsy, but with less shoes.  I cannot even begin to describe my joy with this new series and the wonderful dialogue and even inner dialogue that takes place in First Grave on the Right.  You can throw in a bit of Stephanie Plum for good measure as well.

Charley Davidson is THE Grim Reaper and when she isn’t helping souls cross over to the other side, she helps solves their murders and helps with domestic abuse cases.  The story centers around three lawyers, recently demised that somehow connect her with an entity known as Big Bad.  Ok, I immediately thought of Mr. Big from Sex and the City since Big Bad has a similar name and effect on Charley.  Charley introduces us to several characters that are pretty dead and not crossed over that help her solve her murders.  I expect to read more about them in upcoming stories.  The next one is Second Grave on the Left due sometime in August, 2011.