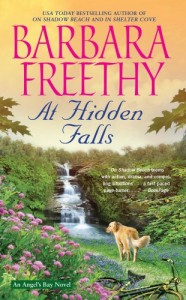 Mysterious dreams draw costume designer Isabella Silviera to Angel’s Bay, the California coastal town where angels occasionally dance above the waves. Bestselling author Barbara Freethy enchants again in this emotional and compelling tale of family secrets, abiding friendships, and heart-touching romance.
Isabella’s drive to Angel’s Bay would have ended in tragedy when her car slid off a cliff if she hadn’t been rescued by Nick Hartley. As he helps her to safety, she realizes he is the man who has haunted her dreams. Nick, however, is committed to reconnecting with his estranged teenage daughter, refusing to respond to his powerful attraction to Isabella. And Isabella’s police chief brother has his hands full with a missing mother, an abandoned baby, and an unknown father. What is Isabella’s role in the mysteries—both past and present— that swirl around the town?When she starts helping at the Hartley family theater, all the pieces begin to link together. Loves found and lost, heartbreak and happiness, courage and betrayal are all part of the patchwork quilt of the community—and of life. Isabella’s gift is seeing the patterns. . . .

A native California, Barbara has lived at both ends of the state. While she misses the hot summer nights of Southern California, she enjoys the beautiful bays and hillsides of Northern California, as well as the exciting and intriguing city of San Francisco.

I dove into this story not realizing that it is part of a series called Angel Bay with a paranormal slant.  Each main character has a psychic gift of sorts and in this case Isabella has the gift of “sight” where she can see the future and warn others of danger.  I found the characters of Nick and Isbella unique and very likable with all of their flaws, mainly that they can see they are meant for each other.  There are the usual twists and turns that build up the suspense and romance.  If you are looking for something magical and not too paranormal, give this series a try.