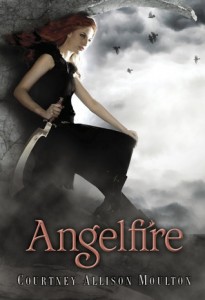 First there are nightmares.
Every night Ellie is haunted by terrifying dreams of monstrous creatures that are hunting her, killing her.
Then come the memories.
When Ellie meets Will, she feels on the verge of remembering something just beyond her grasp. His attention is intense and romantic, and Ellie feels like her soul has known him for centuries. On her seventeenth birthday, on a dark street at midnight, Will awakens Ellie’s power, and she knows that she can fight the creatures that stalk her in the grim darkness. Only Will holds the key to Ellie’s memories, whole lifetimes of them, and when she looks at him, she can no longer pretend anything was just a dream.
Now she must hunt.
Ellie has power that no one can match, and her role is to hunt and kill the reapers that prey on human souls. But in order to survive the dangerous and ancient battle of the angels and the Fallen, she must also hunt for the secrets of her past lives and truths that may be too frightening to remember.

Courtney Allison Moulton lives in Michigan, where she is a photographer and spends all her free time riding and showing horses. She has always loved reading about ancient mythologies, studying dead languages, and telling scary, romantic stories. Angelfire is her debut novel.

I received this book at no cost from Around the World ARC Tours in exchange for my honest review.

This is the first book in a new trilogy about angels and demons and there was a ton of set up for the next two books.  I loved the snarky tone of the characters and found Ellie to be a likable lead.  Ellie is having horrible nightmares and when those nightmares turn out to be real life, she finds herself to be a warrior in a fight between good and evil.  Will comes into Ellie’s life and professes to know everything about her, but doesn’t really tell her much.  He makes her jump through hoops and forces her to really work to get a little tidbit of information.  It is only when her life is in mortal danger that he does some mind trick and lets her in on the secret.  If he is her protector, I think she might be better off taking chances on her own, but maybe this is exactly what Will wants.

I had some trouble getting into the story.  I thought the plot was a little bit slow and I really had to force myself to read it.  In the end, I was glad I finished it, but I really wish that it moved a little bit faster for me.  This may just be me and I may not have been in the mood for a story like this.  It happens.  I will read the next one in the series since I did like most of the characters and I really hope that Ellie develops into someone kick ass.  Will has possibilities as well to become a truly magnificent lead and I really hope he gets a sense of humor.  Parents:  There are some instances of alcohol use, mentions of sexual situations, a little bad language, so this one is best suited for teens over 14.