This one looks super exciting and interesting.  I love memoirs, so this is right up my alley! 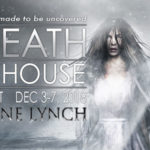 $25 #Giveaway TRAILER REVEAL – BENEATH THE L