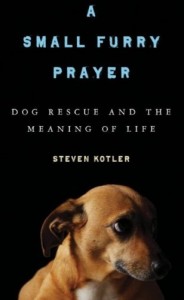 Steven Kotler was forty years old and facing an existential crisis—which made him not too different from just about every other middle-aged guy in Los Angeles. Then he met Joy, a woman devoted to the cause of canine rescue. “Love me, love my dogs,” was her rule, and not having any better ideas, Steven took it to heart. Together with their pack of eight dogs—then fifteen dogs, then twenty-five dogs, then, well, they lost count—Steven and Joy bought a tiny farm in a tiny town in rural New Mexico and started the Rancho de Chihuahua, a sanctuary for dogs with special needs.
While dog rescue is one of the largest underground movements in America, it is also one of the least understood. This insider look at the cult and culture of dog rescue begins with Kotler’s personal experience working with an ever-peculiar pack of dogs and becomes a much deeper investigation into exactly what it means to devote one’s life to the furry and the four-legged.
Along the way, Kotler combs through every aspect of canine-human relations, from human’s long history with dogs through brand new research into the neuroscience of canine companionship, in the end discovering why living in a world of dogs may be the best way to uncover the truth about what it really means to be human.

Steven Kotler is the author of the novel The Angle Quickest for Flight, a San Francisco Chronicle bestseller, and the non-fiction West of Jesus, a 2006 PEN West finalist. His work has appeared in the New York Times Magazine, GQ, Wired, Discover, Popular Science, Details, Outside, National Geographic, and elsewhere, and he writes “The Playing Field,” a blog about the science of sport for PsychologyToday.com. Kotler runs the Rancho de Chihuahua dog sanctuary with his wife in New Mexico.

This is such an interesting story. Steve Kotler went from being dogless to dog rescuer all because of love.  When his girlfriend states that he needs to love her dogs as well as her, he jumps in, well, with reservations, but he is quickly won over by four legged furries that warm his heart.   He gives up everything in Los Angeles to follow his love and his heart to New Mexico where he helps found a sanctuary for dogs.  It is wonderful that this man found his purpose in life through dogs.  People underrate the fulfillment that dogs (and other pets) can bring to someone’s life.  Any one who love dogs and memoirs are going to find this heartwarming story a true pleasure to read.