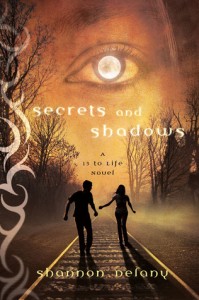 Nothing’s simple when you run with werewolves. Jess Gillmansen thinks she’s seen it all but her eyes are about to be opened to even more danger and a reality far more paranormal than she’s suspected. With Jess’ realization that the Rusakovas’ mother is still alive and imprisoned, the group’s choices become harder and trust more important. Lines are drawn and relationships change as the broken Rusakova family struggles to reunite to free their mother – and those who Jess thought to be normal people show themselves to be much, much more…

Since she was a child Shannon Delany has written stories, beginning writing in earnest when her grandmother fell unexpectedly ill. In 2008 her greatly abbreviated version of 13 to Life (written in just five weeks) won the grand prize in the first-ever cell phone novel contest in the western world through Textnovel.com. Previously a teacher and now a farmer raising heritage livestock, Shannon lives and writes in Upstate New York and enjoys traveling to talk to people about most anything.

The story picks right up after 13 to Life ends and answers a few questions about the cliffhanger ending.  It took me about 100 pages to really become interested in the story in this one as well since I had the same issues with the first book.  The last two-thirds of the book was a page turner.  Of course this one ends with a cliffhanger as well, so be prepared to wait another a year (fingers crossed, maybe later this year?) to read the next installment.

Jess, Cat and Pietr are trying to work together now that they have located the Rusakova’s mother.  As Jess acts as an intermediary between the CIA and the family, they find themselves still being trailed by the Mafia.  A little more light is shed on the gang’s interest in the family.  Pietr and Jess are no closer to becoming attached, although Derek shows his true colors and now we are left wondering what his real story is as well.  There are lots of twists and turns in the plot.  Oh, and Sarah is getting her memory back!  There is some sexual tension, alcohol use and of course, bad words, even though Jess struggles valiantly against them.