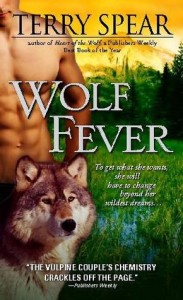 She may be his destiny, but she’s not his first choice…
Hospital nurse and newly turned red werewolf Carol Woods is being pressured by her pack leader to find a mate, but he’s the only guy in the pack who remotely attracts her.
Why is he playing so hard to get?
The fate of the pack rests on his shoulders…
Gray pack leader Ryan McKinley doesn’t want anything to do with Carol unless she’s willing to embrace her wolf nature-no matter how beautiful she is.
But when a virus infects the local lupus garou pack, Ryan realizes just how wrong he’s been not to seize the moment with the woman he’s come to love. And now, it may be too late…

With almost 56,000 copies sold, Terry Spear is also a retired lieutenant colonel in the US Army Reserves. She received her MBA from Monmouth College. An eclectic writer, she dabbles in the paranormal as well as writing historical and true life stories for both teen and adult audiences. Spear lives in Crawford, Texas.

MY THOUGHTS
REALLY LIKED IT
Part of my fascination with this Terry Spear’s wolf series is that she gets the technical parts down so that the story is incredible believable.  You understand the transformation and the need for a pack.  She does a wonderful job uniting the human condition with the animal instincts.  I have really enjoyed the series so far, but this one wasn’t my absolute favorite.  That usually falls to the first in the series since there is always something special about your first time.
Carol is a newly minted wolf in Silver City (yes, I can hear you groan) with psychic abilities when she meets alpha Ryan who doesn’t believe in psychic ability but is attracted none the less.  Lots of heavy petting ensues since if they mate, they are mated for life.  There are lots of hot moments in the story and overall this will get you through a cold winter night.  Overall, this is a fun read if you enjoy some feverish werewolf sex.