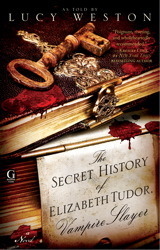 Sovereign Power. Eternal Pleasure.Revealed at last in this new vampire saga for the ages: the true, untold story of the “Virgin Queen” and her secret war against the Vampire King of England. . . .
On the eve of her coronation, Elizabeth Tudor is summoned to the tomb of her mother, Anne Boleyn, to learn the truth about her bloodline—and her destiny as a Slayer. Born to battle the bloodsucking fiends who ravage the night, and sworn to defend her beloved realm against all enemies, Elizabeth soon finds herself stalked by the most dangerous and seductive vampire of all.
He is Mordred, bastard son of King Arthur, who sold his soul to destroy his father. After centuries in hiding, he has arisen determined to claim the young Elizabeth as his Queen. Luring her into his world of eternal night, Mordred tempts Elizabeth with the promise of everlasting youth and beauty, and vows to protect her from all enemies. Together, they will rule over a golden age for vampires in which humans will exist only to be fed upon. Horrified by his intentions, Elizabeth embraces her powers as a Slayer even as she realizes that the greatest danger comes from her own secret desire to yield to Mordred . . . to bare her throat in ecstasy and allow the vampire king to drink deeply of her royal blood.
As told by Lucy Weston, the vampire prey immortalized in Bram Stoker’s Dracula, this spellbinding account will capture your heart and soul—forever.

This book is a fusion of my favorite historical fiction writers and fantasy masters.  The book starts out in typical historical fashion with Elizabeth gaining the throne and then being told the state secrets which include the fact that she is the *one* that time has designated as *the* vampire hunter with special skills.  It only gets better from there.  The story becomes a quickly paced thrilled as we watch Elizabeth gain power and ability to hunt vampires.

I really enjoy these mash ups, so if you have tried before and didn’t like them, you might want to take a chance on this one.  I really liked this one better than Abraham Lincoln, Vampire Hunter.  Couldn’t you just imagine all historical characters coming together to create a super force of vampire hunters?