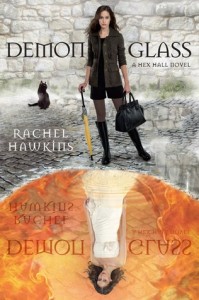 Sophie Mercer thought she was a witch.

That was the whole reason she was sent to Hex Hall, a reform school for delinquent Prodigium (aka witches, shapeshifters, and fairies). But that was before she discovered the family secret, and that her hot crush, Archer Cross, is an agent for The Eye, a group bent on wiping Prodigium off the face of the earth.

Turns out, Sophie’s a demon, one of only two in the world—the other being her father. What’s worse, she has powers that threaten the lives of everyone she loves. Which is precisely why Sophie decides she must go to London for the Removal, a dangerous procedure that will destroy her powers.

But once Sophie arrives she makes a shocking discovery. Her new friends? They’re demons too. Meaning someone is raising them in secret with creepy plans to use their powers, and probably not for good. Meanwhile, The Eye is set on hunting Sophie down, and they’re using Acher to do it. But it’s not like she has feelings for him anymore. Does she?

Rachel Hawkins is a high school English teacher. She lives with her family in Alabama, and is currently at work on the next book in the Hex Hall series.  (This was taken from Hex Hall, so I can only hope that she is working on another book!)

This one picks right up where Hex Hall ended and another book I read straight through in a few hours.  I was lucky enough to read these back to back and now I am left with that empty feeling when I finish a great read and must wait forever to get these characters back into my head.  After reading this I DEMAND a spin off for Jenna!  Her punky pink vampireness really made me want to get her whole back story and find out where she is going.  OK, back to Sophie and her confusing life.

Sophie has a lot on her plate after discovering that her father has never really told her the truth about her genetic history, falling for the wrong, totally bad boy, Archer, and being the target of the Eye.  Seriously, The Eye makes KAOS look like a bunch of geniuses as they try hit after hit on Sophie.  I am still waiting on the verdict for Archer.  I don’t think that one will be read until there is a final volume in this series.  Keep ’em coming!