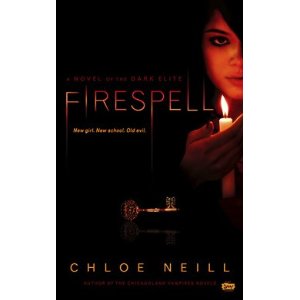 From the author of the Chicagoland Vampires novels.

A new series about a boarding school filled with something worse than homework.

Lily’s parents have sent her to a fancy boarding school in Chicago filled with the ultra-rich. If that wasn’t bad enough, she’s hearing and seeing bizarre things on St. Sophie’s creepy campus. Her roommate, Scout, keeps her sane, but keeps disappearing at night. When one day Lily finds Scout running from real-life monsters, she learns the hard way that Scout is involved in a splinter group of rebel teens.

They protect Chicago from demons, vamps, and dark magic users. It’s too bad Lily doesn’t have powers of her own to help. At least, none that she’s discovered yet…

Chloe Neill was born and raised in the South, but now makes her home in the Midwest, just close enough to continue transcribing the adventures of Merit and her fellow Chicagoland vampires.

This is a very quick and enjoyable read.  Chloe Neill definitely knows how to craft the perfect spell of a book.  Everything is paced perfectly and the characters are likable, even the villains.  This story doesn’t get too much into the bad guys here since the characters are being developed for the series.  The story is pretty much G rated.  There is a little bit of violence, but nothing worse than a Saturday morning cartoon.  The banter between characters is a blast and several of the lines will have you cribbing them for further use of your own.

Lily is dumped in boarding school by her parents without much warning and when she lands at St. Sophie’s, she becomes friends with her roommate, Scout.  There is wonderful chemistry between the two and Lily quickly discovers that the school and her friend have some dark secrets.  Lily soon discovers that her own family has some secrets as well.  (You will get to more of that in the second book, HexBound.) Of course, there is all of the high school drama played out as well.  Fans of Marlene Perez’s Dead Is series are going to love this one!

WANT TO WIN A COPY OF THIS BOOK?
Go over to FOREVER YOUNG (adult) and enter right now!  Open worldwide! Ends 12.26.10