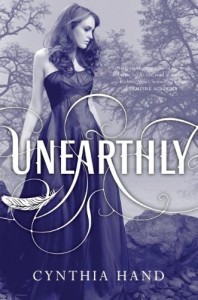 Clara Gardner has recently learned that she’s part angel. Having angel blood run through her veins not only makes her smarter, stronger, and faster than humans (a word, she realizes, that no longer applies to her), but it means she has a purpose, something she was put on this earth to do. Figuring out what that is, though, isn’t easy.
Her visions of a raging forest fire and an alluring stranger lead her to a new school in a new town. When she meets Christian, who turns out to be the boy of her dreams (literally), everything seems to fall into place—and out of place at the same time. Because there’s another guy, Tucker, who appeals to Clara’s less angelic side.
As Clara tries to find her way in a world she no longer understands, she encounters unseen dangers and choices she never thought she’d have to make—between honesty and deceit, love and duty, good and evil. When the fire from her vision finally ignites, will Clara be ready to face her destiny?
Unearthly is a moving tale of love and fate, and the struggle between following the rules and following your heart.

Cynthia Hand divides her time between Southern California, where she lives with her husband and son, and southeast Idaho near the Teton Mountains. She teaches creative writing at Pepperdine University. This is her first novel.

I am adding my voice to the mass of people who love this book.   This story approaches angels in a whole different direction that the multitudes of books recently released on this subject.  The whole story is background on Clara and her family and doesn’t get to the super-page-turning point until the last 75 pages or so.  Once I put it down, I now can’t wait for the next book in the series.  It left me with a ton of unanswered questions.  I really thought the book was looking to conclude at the end of one book, but the author completely surprised me!  This book would have been absolutely perfect except that I thought the descriptions were a little bit too much.  I know that is me since I am more of a dialog person.  OK, so how much longer until the sequel?

Clara is a really strong character, but it bothered me that she would blindly follow the path her mother and tradition has laid out for her.  It isn’t until her visions uproot the family and they move to Wyoming that she really becomes a person in her own right.  When she meets Angela and Wendy, her two new BFFs, there is a true dichotomy of good versus evil.  Wendy is so sugary sweet, while Angela has a tiny, little pitch fork, being part fallen angel.  I think Angela might play a more important role in the next book.  There is of course, the evil elements in the Black Wings, those fallen angels, who aren’t quite demons.  There is an excellent point made that there really isn’t true good or true evil, only shades of each.

There is of course the all important Love Triangle in the form of Tucker and Christian — ok — there are a few name plays going on here, but it works.  Christian is a complex character and again there is more than meets the eye with him.  I can’t wait to see if Angela and Christian have some sort of angel club happening in the next installment.

This is probably safe for most children over 12 years old since there is not much more than kissing.  There are references of rape which helps the evil angle. I don’t remember any overt alcohol or drug references.