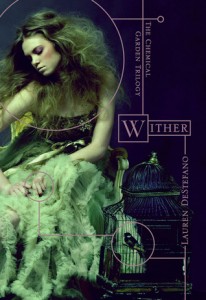 When sixteen-year-old Rhine Ellery is taken by the Gatherers to become a bride, she enters a world of wealth and privilege. Despite her husband Linden’s genuine love for her, and a tenuous trust among her sister wives, Rhine has one purpose: to escape—to find her twin brother and go home.

But Rhine has more to contend with than losing her freedom. Linden’s eccentric father is bent on finding an antidote to the genetic virus that is getting closer to taking his son, even if it means collecting corpses in order to test his experiments. With the help of Gabriel, a servant Rhine is growing dangerously attracted to, Rhine attempts to break free, in the limited time she has left.

Lauren DeStefano earned her BA in English with a Concentration in Creative Writing from Albertus Magnus College in Connecticut in 2007. Wither is her first novel.

SOURCE: Around the World ARC Tours

All I can say after reading this, is when will the next one be released?  I just couldn’t put this one down once I started and even now, I am still thinking about the characters. In this dystopian tale, Rhine is sixteen and forced into marriage after being stolen from her home.  She learns that her husband is more or less a pawn in his father’s mad scientist games in which he is experimenting on corpses to stop the insidious virus that plagues mankind.  The virus causes women to die at twenty and men at twenty five.

Without going into to much plot detail, Rhine tries to escape and with the help of her sister-wives, she gain the courage to make the final attempt.  This is truly a page turner and it will leave you with many different feelings.  I do hope in the end, Rhine finds her contentment.  I guess I will have to wait for the installment to find this out.